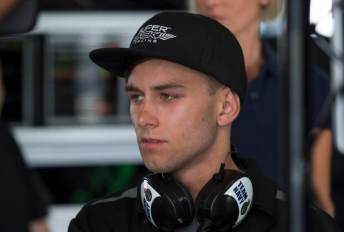 Andre Heimgartner is set to remain on the V8 Supercars Championship grid this season, driving the second car at Lucas Dumbrell Motorsport.

The young Kiwi had been strongly linked to the #3 LDM Holden late last year following his early exit from Super Black Racing.

With talks subsequently stalling, Heimgartner announced deals to drive in the Bathurst 12 Hours and Australian GT Championship in a Melbourne Performance Centre Audi.

Further negotiations with LDM, however, have now seen the 20-year-old withdraw from the GT drive, which for Bathurst will be taken over by Shae Davies.

Although LDM could not be contacted for comment, MPC has confirmed to Speedcafe.com that it is now searching for a full-time replacement driver ahead of the AGTC season opener in Adelaide.

Heimgartner will slot into LDM alongside the highly rated Nick Percat, who returns to the team for a second season.

The signing will complete the full V8 Supercars Championship grid for 2016, which expands to 26 cars thanks to the addition of a third entry at Triple Eight.

Last year saw Heimgartner graduate to the V8 Supercars Championship from the Dunlop Series, driving in the first 13 events with Super Black before being replaced by Chris Pither.

Heimgartner has spent the summer racing in his local NZ Touring Car Series aboard a Holden Commodore, winning the most recent two rounds.