Derani had taken the lead from the Taylor entry with just under two hours remaining and was not headed for the duration.

The Ricky Taylor/Jordan Taylor/Max Angelelli/Rubens Barrichello crewed Corvette went on to secure second, despite a long final stop as exhaust fumes briefly saw Ricky Taylor step out of the car.

ESM had lost its greatest challenger in the 10th hour, when the identical Ligier-Honda of Michael Shank Racing suffered an engine failure.

The equally rapid DeltaWing led early with Katherine Legge at the wheel, but also met an early demise when Andy Meyrick struck a stationary Prototype Challenge car just over three hours in. 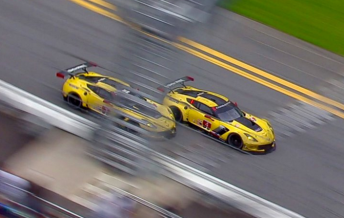 The two Corvette drivers were unleashed for a late race fight

Corvette meanwhile recorded a stunning one-two in GTLM after a race-long fight with arch rivals Porsche.

Oliver Gavin led home team-mate Antonio Garcia by just 0.034s at the end of the 24 hours as the pair battled between themselves.

Gavin had taken the lead from the Earl Bamber driven #912 Porsche with half an hour remaining in a move that saw minor contact between the two combatants.

It was a tough debut for the new Ford GTs, which both suffered early gearbox problems.

Audi squad Magnus Racing won a dramatic GTD after Rene Rast, who is among a host of drivers heading straight to the Bathurst 12 Hour, saved crucial fuel in the closing stages.

The Fabio Babini driven Konrad Lamborghini had charged to the lead with 10 minutes to go only to run out of fuel moments later.

Shane van Gisbergen’s WeatherTech Porsche led portions of the race in GTD but saw its charge halted by a rear wing failure with the Kiwi at the wheel in the final hour.

JDC Miller Motorsports were the winners of the Prototype Challenge, finishing four laps ahead of their nearest rivals in a thin class field.