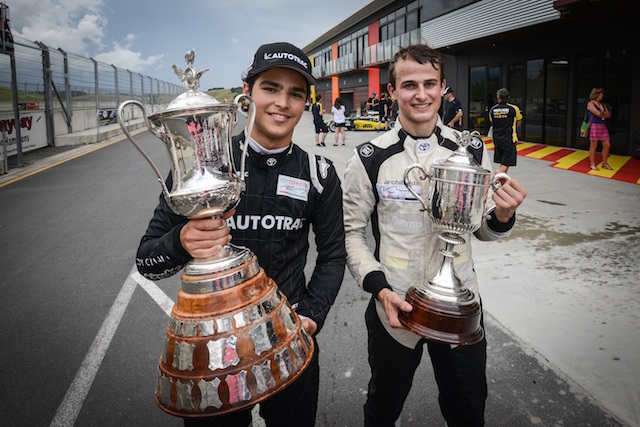 Promising Brazilian youngster Pedro Piquet has won the feature race to claim the New Zealand Motor Cup in round three of the Toyota Racing Series.

Piquet etched his name on the trophy which formerly carried New Zealand Grand Prix status and which has been claimed by a brace of F1 World Champions since it was first awarded in 1921.

Piquet has speared into second in the championship courtesy of the success after starting the weekend seventh in the points standings.

“Getting pole position in qualifying yesterday was really important,” Piquet said of his maiden TRS win.

“Each day I’ve been getting better in the car.”

Munro made a solid start from third on the grid but could not haul in the Brazilian.

“Jehan (Daruvala) piled on the pressure but I managed to hold him off.”
British 16-year-old Lando Norris claimed sixth position and maintains control of the standings going into the final Taupo and Manfeild rounds.

Norris was scheduled to start from the front row in the feature race but was relegated eight places for an incident in the morning race won by the Chinese driver Guanyu Zhou.

Zhou started from the front row of the reverse grid race and was never headed while all the action happened behind him.

The race was stopped twice to retrieve damaged cars from dangerous positions.

Norris had to pit to repair damaged suspension and only finished 16th.

Brendon Leitch made the most of his opportunities to finish second after starting fourth.

In the weekend’s opening race, Norris scored his third victory of the TRS season, leading all the way to beat Daruvala and Piquet.