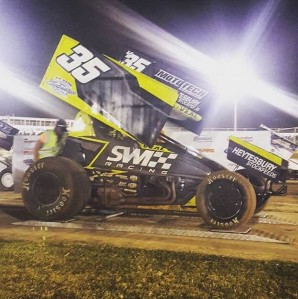 It was a south-west podium with Darren Mollenoyux finishing second ahead of newly crowned Victorian champion John Vogels.

Starting from fourth, Veal had to bide his time on the lightning fast track as 2014 Knoxville Raceway Track Champion Ian Madsen led early.

Veal realised his third big money feature inside a week at his home track.

“I just had to wait my time for lapped traffic to come into it and I knew that would work for us,” Veal said.

“I’m feeling great about tomorrow (Sunday) night, after the week we’ve had it’d be unbelievable to get the Aussie #1 on our car.”

The championship decider completes seven nights of racing in 10 nights at the Warrnambool venue.