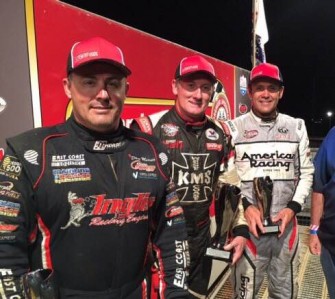 Veteran Brooke Tatnell staked his claim for a sixth national title with a stunning win on the opening night of the 2016 Australian Sprintcar Championships at Warrnambool’s Premier Speedway.

After starting fourth, Tatnell took a popular victory ahead of good friend and fierce rival Kerry Madsen in front of another bumper crowd.

Grant Anderson and World of Outlaws star Madsen took turns in the lead in a pulsating final but it was Tatnell who bided his time the best in the 30 lap feature.

It was the third time in the past week Madsen has finished second at the venue.

Pole sitter Anderson slipped to fourth despite a promising night.

After battling illness all week, 44-year-old Tatnell was beaming following the thrilling battle.

“I wasn’t happy with those who had written us off,” Tatnell said after the victory.

“We’ve been a factor all summer and now we’re in a great spot to win Sunday night.”

Grand Annual Sprintcar Classic champion Jamie Veal headlines the second half of the monster field of 101 cars to hit the track tonight, ahead of tomorrow’s finale.