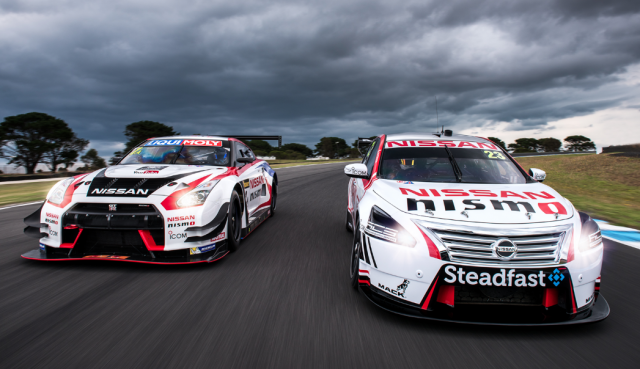 Nissan Australia boss Richard Emery will return to Japan next week for further talks with Nismo about the company’s V8 Supercars future.

Although stressing the importance of motorsport to the brand in front of media at Phillip Island this week, Nissan remains yet to commit to V8 Supercars beyond 2016.

Emery’s firm has recently purchased a GT-R GT3 from Nismo for use in the Bathurst 12 Hour but has shied away from a tilt in the Australian GT Championship, where full factory efforts are discouraged.

A decision on Nissan’s V8 Supercars plans was due in October last year, before a management shake-up at Nismo delayed the process until at least March.

According to Emery, all aspects of the program remain officially under review, including the technical package and team alliance.

V8 Supercars issued its Gen2 guidelines to teams last July, providing a framework for four and six cylinder engines to enter the sport in 2017.

The category’s technical director David Stuart visited Nismo’s base in Yokahama, Japan, late last year as part of ongoing discussions about how the final rules will look.

“There is a considerable ongoing dialogue between V8 Supercars’ technical team, Nismo and our team,” Emery told Speedcafe.com.

“That’s looking at how some of our engines might fit those broad-based rules, which aren’t clearly defined as yet.

“There’s dialogue about our GT3 engine, what it fits and what it doesn’t and how much can be left like it is.

“V8 Supercars is still feeling out manufacturers and they don’t want to say ‘here it is definitively’ without having a proper dialogue.

“If they are too definitive then someone might come along and say ‘if they are the rules, we’re out’.

“They’re still saying ‘what would cause you a problem if it was like this’. That conversation is ongoing.”

Emery continues to stress a desire not to be the first manufacturer to debut a new package under the Gen2 rules after his team’s struggles to develop its current engine.

There however remains a real possibility that Nismo’s preferences could change that philosophy, should it be comfortable with the final elements of the regulations.

“If their (Nismo’s) fundamental view on that is they want a Nismo engine then yes, maybe we will be the first in (with a V6 turbo).

“But then I’ll have a whole bunch of people at Yokohama right behind making our engine go fast. Last time we were doing it ourselves.”

Recent dialogue between Nissan and V8 Supercars has included both technical and marketing matters, with the manufacturer pushing for more freedoms with which to activate its investment.

While the company will debut its Nismo TV service in Australia at the Bathurst 12 Hour, V8 Supercars’ media rights deal restricts similar live content being streamed from its events.

Emery however proudly speaks of a new ‘pit wall station’ that his team will introduce at V8 Supercars races this year, allowing fans access to live telemetry and radio from its four cars.

Describing Nissan as ‘an agitator’ by pushing the boundaries on the marketing front, Emery says that his company needs to work with V8 Supercars on all aspects of the business.

“I don’t think we’re pushing that hard, we are just trying to make sure V8 Supercars understands what a manufacturer wants out of the sport,” he said.

“I think to some extent Ford were disengaged. Holden pay the money to go racing but don’t engage or activate the way do. That’s the way they’ve done it for a long time.

“Because we’re in a development phase with our car, we had to activate better off the track to make it work for us. We’ve pushed their buttons a bit but they knew they had to move.

“Matt Braid (V8 Supercars marketing director and former Volvo Car Australia CEO) knows how manufacturers think, so from that perspective I think they’re trying to make sure they give themselves every opportunity to manufacturers to commit to it.

“But in doing so they create a grey area because they’re trying to feel people out as to where they’re at.

“I understand where they’re at. I don’t know where they are with other manufacturers and to a certain extent I don’t really care.

“My only concern would be if they write the rules to placate a particular manufacturer and ultimately affect the program for everybody else.

“But I see no evidence that that will be the case at this point.”