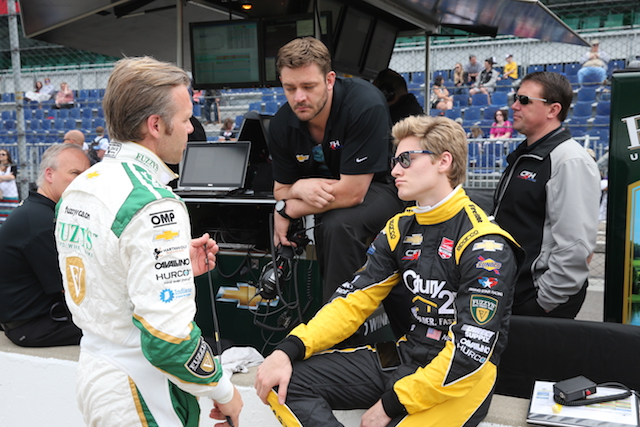 Ed Carpenter has split with former partners Sarah Fisher and Wink Hartman. However the squad confirmed it will run Josef Newgarden for the full season in 2016.

IndyCar team owner and driver Ed Carpenter has announced he has split with partners Sarah Fisher and Wink Hartman.

Returning to running under the Ed Carpenter Racing banner from 2016 and beyond, the squad ran as CFH Racing last season after combining single-car teams.

Co-owned by Carpenter, Tony George and Stuart Reed, the squad will see Josef Newgarden contest the full season in the #21 Chevrolet for ECR with backing from Fuzzy’s Ultra Premium Vodka scheme for the first four events.

Carpenter meanwhile is locked in for five oval races in the #20 Fuzzy’s Ultra Premium Vodka Chevrolet with support for the road and street races still being sought.

Carpenter said that Fisher and Hartman have decided to put their energies into other business interests, although the former is said to be continuing to assist ECR with sponsorship development and ongoing work with existing team partners.

“While we had a great year as CFH Racing, we have had some partnership changes within the organisation and it makes the most sense to return to ECR,” Carpenter said.

“I am proud of what we have accomplished as a team since we started in 2012 and look forward to building upon that success for another exciting Verizon IndyCar Series season.”

Meanwhile Stefan Wilson, the brother of Justin Wilson who was tragically killed in the Pocono race last year, is inching closer to gaining a start in the Indianapolis 500.

Wilson has secured backing from the American Solar Energy Society for a one-off start at The Brickyard.

The 26-year-old, who finished third in the 2011 Indy Lights Championship after scoring two wins, has one IndyCar start to his credit when he teamed up with Justin at Dale Coyne Racing in the Baltimore race in 2013.

The 100th running of the Indy 500 has received several one-off entries headed by the Pirtek Team Murray #61 Chevrolet that will be driven by third generation racer Matthew Brabham.

Other entries previously announced for the showcase event include Bryan Clauson in the Dale Coyne #88 Jonathon Bryd’s Cafeteria Honda, and the yet-to-be-confirmed all female Grace Autosport entry for Katherine Legge.