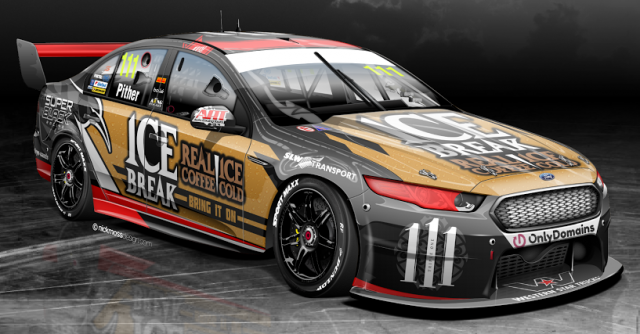 The Parmalat owned company joins the team with its long-time driver Chris Pither, who continues in the ride after taking over for the final two events of last season.

It marks the first full main game season for both the driver and sponsor after recent seasons together in the Dunlop Series and V8 Utes.

Super Black has also confirmed that its purchase of a Racing Entitlements Contract has received official approval from the V8 Supercars Board.

After leasing an entry from DJR Team Penske for its debut season last year, Super Black owner Tony Lentino has bough the REC previously campaigned as the #47 at Walkinshaw Racing.

Super Black’s Ford will continue to be run out of Prodrive Racing Australia alongside that of reigning champion Mark Winterbottom, Chaz Mostert and Cameron Waters.

“I’m very fortunate to have had the support of the Ice Break brand since 2010,” said Pither.

“They have been an integral part of my racing career since then and it’s fantastic they are taking the next step on the journey alongside myself and Super Black Racing.

“It’s an understatement to say we are excited and looking forward to the new season.”

Ice Break’s Kellie Green praised Pither’s efforts to promote the company both on and off track.

“It’s great to continue our relationship with Chris as we enter the main game for the first time,” she said.

“He’s a brilliant ambassador for our brand on both sides of the Tasman and obviously a very talented driver.

“Chris is down to earth, hardworking and has a great attitude which he has proved to us time and time again, both on and off the track.

“We are thrilled to support Chris and Super Black on this next chapter of his racing career.”