Shane van Gisbergen today heads to the Daytona 24 Hours, kicking off what the V8 Supercars star expects will be another busy season of international GT racing.

For the third straight year the 26-year-old is sharing an Alex Job Racing Porsche in the GTD class at Daytona.

Van Gisbergen helped the team to second in GTD last year and, armed with a brand new GT3 R model Porsche, hopes to go one better this time around.

Although the car’s lead driver, Leh Keen, set the fastest time in the pre-event test earlier this month, Van Gisbergen says it’s hard to gauge how it’ll go against the competition in the race.

Audi, Lamborghini, Dodge, Ferrari, BMW and Aston Martin GT3 machinery all join the Porsche in the GTD category, for which IMSA runs its own Balance of Performance system.

“It’s pretty underdeveloped compared to the McLaren (GT3 car) but it’s got a lot of potential,” Van Gisbergen told Speedcafe.com of the new Porsche.

“We made a lot of gains with it over that test weekend and I think it’ll be alright for the race.

“But it’s very hard to know who has what hidden until the race starts.

“At the test the Lambo was really, really fast and a couple of others were sandbagging.

“The latest Balance of Performance sheet has come out and they’ve slowed down the Lambo.

“Because there were so many Porsches we were running flat-out (at the test), so it is what it is.” 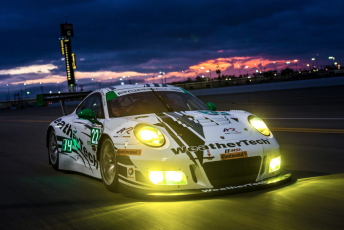 Van Gisbergen says he thoroughly enjoys the challenge of 24 Hour races such as Daytona.

“There’s a set strategy in play with what driver does what, but they normally go out the window after a few hours.

“Last year Leh got sick so I had to jump in and do the two Gold driver stints. I ended up doing 10 or 11 hours of the race.

“They’re so unpredictable the 24 Hour races, but that’s what makes them good.”

While yet to be officially locked in, the Kiwi is also preparing to return to the Blancpain Endurance Series for a second year as a factory McLaren pilot.

Van Gisbergen won twice in four appearances for McLaren during his rookie campaign in 2015, cementing his reputation with the manufacturer.

“There’s nothing official at the moment, but I’ve got permission to do it (from Red Bull team boss Roland Dane),” Van Gisbergen told Speedcafe.com of the Blancpain Series.

“We can do four of the five races, which is the same as last year (the Nurburgring season finale clashes with the Sandown 500).

“There’s a few teams running McLarens, so hopefully there will be something there.

“I think it’d be much better this year knowing the circuits and the car. “Last year was great to experience another style of racing and work with some good drivers as well.

“It’s a cool thing learning how to share a car and work with your team-mates like that.

“It’s a whole different style to racing a V8 where you’re adapting the car to suit yourself.”

Van Gisbergen will head from Daytona to the following week’s Bathurst 12 Hour, where he’ll share one of two McLarens fielded by his former V8 Supercars team Tekno Autosports.

“I went into Tekno the other day and all of those guys are pumped,” he said.

“They’re putting a lot of effort in for it and it’s going to be a pretty good race.”

Van Gisbergen will share his entry with team owner Jonathon Webb and factory ace Alvaro Parente, while Will Davison lines up in the second car alongside imports Rob Bell and Andrew Watson.