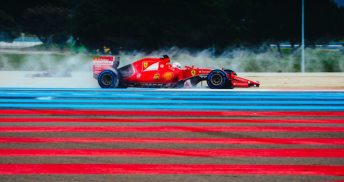 Sebastian Vettel posted the fastest time among three participating teams on the final day of testing for Pirelli’s prototype wet tyre at the Paul Ricard circuit.

The ‘blind’ test meant that the Pirelli tyres were devoid of markings on the sidewalls with the teams unaware of what specification tyres they were testing on 2015-spec cars.

Vettel posted a 1:06.75 after turning 134 laps ahead of Red Bull’s Daniil Kvyat (1:06.83s) with McLaren’s Stoffel Vandoorne recording a 1:07.75s which was almost a second quicker than Daniel Ricciardo’s opening day best.

With the circuit’s sprinkler system allowing for variable degrees of wet conditions, Pirelli were able to try a number of full wet tyre prototype compounds and constructions.

The three teams combined completed 659 laps on the short circuit which totalled 2326km.

Vandoorne was the only driver to complete both days with Ricciardo and Raikkonen fulfilling duties on the opening day.

Pirelli will examine each team’s telemetry with its own data to fully evaluable the performance of the different prototype tyres.

The first pre-season test for all F1 teams is scheduled for Barcelona from February 22-25.

Next Story Haas F1 to unveil 2016 cars in Barcelona