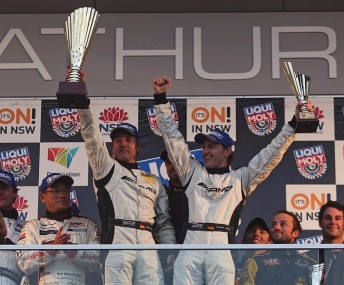 Schneider and Jaeger celebrate victory in 2013

The team has confirmed combinations of Schneider/Maro Engel/Austin Cindric and Thomas Jaeger/Nico Bastian/David Reynolds for its two AMG SLS GT3s.

Schneider and Jaeger were part of Erebus’ winning entry in 2013, while Schneider, Engel and Bastian dominated much of the following year’s race before falling foul of mechanical trouble.

American teenager Cindric is the only carryover from last year’s line-up, which ran without any factory stars.

“We’ve had fantastic combinations in the past, but we believe the blend of maturity and youth in the #63, and the experience in the #36, will maximise the performance of the cars.”

Ryan says he’s particularly pleased to welcome Schneider back into the fold. “He’s accomplished so much in his career including five DTM Championships and wins at many international GT endurance races, including with us at the 12 Hour,” he said.

“It’s always a privilege to welcome such a great motorsport Champion into our team, and we always learn from Bernd in some way.”

The now 51-year-old Schneider’s Bathurst win with Erebus came during a season where he also won the Dubai, Spa and Nurburgring 24 Hour classics.

“It is a great pleasure for me to be invited to come back to Australia again and contest the Bathurst 12 Hour with Erebus Motorsport and AMG Customer Sports, especially after the impressive victory in 2013,” said Schneider.

“I am looking forward to the upcoming race.”

Engel is meanwhile looking to avenge his 2014 Bathurst misfortune, which came amid a split from Erebus’ V8 Supercars squad after just a single season.

“I’m really happy to be returning to Bathurst – it’s such an amazing track and event that sits firmly among the top endurance races in the world,” he said.

“It has always been a huge pleasure working with Barry (Ryan) and the whole team, so I am really looking forward to getting to work with everyone again.

“Together with Bernd and Austin we’ll have a really strong line-up that should give us a good chance to fight for the win.

“We will do everything we can to put the Erebus Motorsport SLS on the top step of the podium.”

Erebus’ new V8 Supercars recruit David Reynolds is the only one of the six that is yet to race an SLS GT3.

The former Carrera Cup champion, whose last 12 Hour start came aboard a Porsche in 2011, had his first taste of the Mercedes at Phillip Island last week

“I’m looking forward to sharing the car with two great drivers in Nico and Thomas, and hopefully I can get up to speed quickly,” said Reynolds.

“This race requires a bit of a different mindset than a V8 Supercar race – there is a lot more variety in machinery with varying speed differentials, and it’s double the length of a Bathurst 1000 so it requires a lot more from you as a driver.

“It’s a great way to start the year off.”