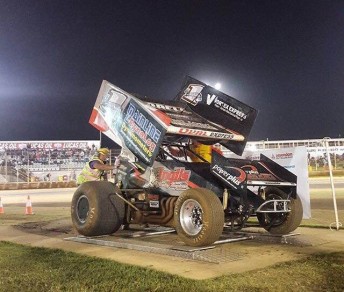 World of Outlaws star Kerry Madsen was banished and young star James McFadden lost a podium placing in a controversial sequel to last night’s Prelude to the Championship at Warrnambool’s Premier Speedway.

David Murcott had the best possible preparation to his title defence claiming a flag-to-flag victory.

On the final corner Madsen and McFadden were involved in a clash where the former made a desperate final lunge in the feature race.

Heavy contact ensued which sent McFadden into a rollover across the finish line, while Madsen spun past the chequered flag.

While Murcott led from pole to win the race ahead of Californian Kyle Hirst, a war of words erupted between the two heated drivers.

Stewards eventually deemed Madsen was the ‘primary cause of the incident’ and sent him to the rear of the field, while McFadden was relegated to 12th.

That promoted Steven Lines to the final place on the podium – reward for a stunning drive through the field from a 20th starting position.

Newly crowned Grand Annual Sprintcar Classic champion Jamie Veal was elevated to fourth.
After winning the past two Australian Championships, Murcott will shoot for a third this weekend brimming with confidence after the dominant victory.

He headlines another monster car count exceeding 100, when the 3 night 2016 title begins at Premier Speedway on Friday – with all eyes now very much on the brewing war between Madsen and McFadden.