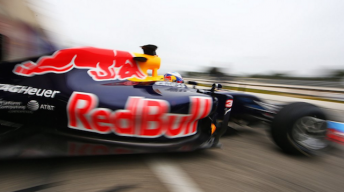 Daniel Ricciardo leaves the pits during the Pirelli wet tyre test at the Paul Ricard circuit. pic: via Twitter

The Paul Ricard test, which will stretch to a second day, saw McLaren test ace Stoffel Vandoorne end up .4s slower than Ricciardo.

Kimi Raikkonen was the only other driver to take part in the test, ending almost a second down on Ricciardo’s time.

Both Ricciardo and Raikkonen completed 99 laps while Vandoorne completed 87 tours.

The McLaren ended its day early after developing a problem with the power unit.

The cars performed 10-lap stints before they returned to the pits in order for the track to be soaked for each run by the circuit’s sprinkler systems.

Pirelli experienced its first serious rain test in competition last year during a saturated US Grand Prix at the Circuit of the Americas.

The tyre supplier is focussing on several areas of improvement in the prototype tyre including great performance to combat aquaplaning.