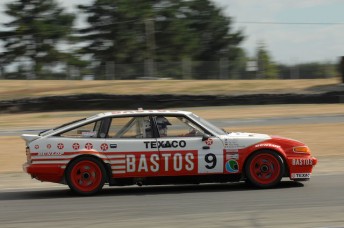 The Rover will make its debut at the south island circuit for owner Allan Scott who managed TWR’s engine division in England from 1979 to 1994.

“Having purchased the car in the UK in 2013, I have fully restored it,” Christchurch-based Scott said.

“My Rover has an extensive history, and among the highlights are winning the prestigious Silverstone Tourist Trophy (TT) in 1986 in the hands of New Zealand’s only Formula 1 champion, Denny Hulme, and UK race driver Jeff Allam.

Scott will campaign the Rover in the modern classics category and will race a diverse array of vehicles from the 1970s and ‘80s including a Datsun 240Z, a Nissan 280Z, an Alfa Romeo Alfasud and a TWR-built VL Holden Commodore.

Another key machine on the program is the Lycoming Special built by Auckland engineer Ralph Watson which will be raced by owner Ralph Smith.

Powered by an air-cooled 5244cc aircraft engine running through a Studebaker gearbox to a Ford V8 differential, the Lycoming’s engine is mounted upside down and back to front.

Since undergoing a major restoration from two trailer loads of parts, Smith has competed in classic and historic meetings across New Zealand, as well as Australia, the US and the famed Goodwood Festival of Speed.

ENZED Central Muscle Cars with support from the Pre 65 category as well as the Highlands modern and nostalgic classics, and historic saloons and single-seater classes will be in action across the weekend.