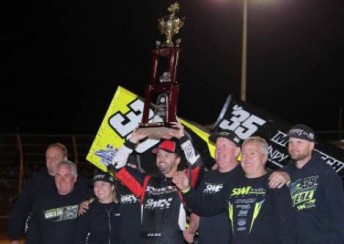 Veal becomes the first Warrnambool based driver to win the Classic which is considered the greatest prize in Australian speedway.

“I’ve been wanting this for so long,” Veal told Speedcafe after the nail biting 40-lap finale.

“To do this in front of my home crowd, it’s a dream come true.”

Veal, who started from pole position, was made to work overtime for the victory and $30,000 winner’s cheque.

He was hounded throughout the race, first by defending champion Kyle Hirst and then three time Classic winner Kerry Madsen.

Veal also had to contend with five caution periods, including on the final lap which set up a tense run to the checkered flag.

But he was able to hold off Madsen and a fast finishing Robbie Farr who completed the podium.

“Kerry’s one of the best in the business, so to beat him makes it even better. “I’m worn out.

“Those last few laps seemed to go for three weeks.”

Only 15 of the 24 car field completed the punishing final.

The sprintcar festival continues in Warrnambool on Tuesday with 80 cars nominated for an Australia Day Prelude to the Championship before the three night Australian titles kicks off at the same venue on Friday.