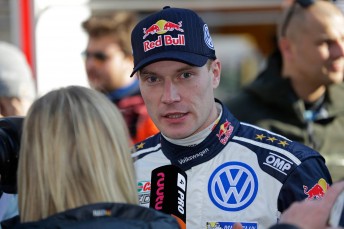 FIA stewards have given Finnish rally star Jari-Matti Latvala a suspended one round ban and fine after he knocked down a spectator during Rallye Monte Carlo.

The stewards fined Latvala and co-driver Miikka Anttila €5,000 ($7,700AUD) and imposed a one-rally ban on Latvala, suspended for the rest of the 2016 WRC season.

The incident occurred when Latvala left the road on Stage 11 and crashed through a ditch.

He immediately drove off heading back to the road, knocking down a spectator who had bent down to pick up what appeared to be a camera.

Although the spectator is said to not have been injured, officials declared Latvala had the obligation to stop straight away.

Latvala claimed that mud and water was obscuring his view at the time.

A stewards’ statement said Latvala had argued: “It was only when the visibility came back that he saw some people jumping to the side and at the same time he saw the possibility where he could get back onto the road. He added that he never thought [of] having hit someone.”

“The stewards stated that, looking at the images, it would be hard to believe that the driver and/or co-driver had not realised that they had hit a spectator as the body could be seen quite prominently on the bonnet and right in front of the windscreen.

“At that moment the visibility through the windscreen on the driver’s side was not so bad and the body could clearly be seen clearly.”

According to the stewards’ report, Latvala contended his head would have been moving up and down as the car bounced over the grass at the time and he would not have had a clear view.

But the officials concluded: “It is not plausible for the stewards that the crew did not even consider the possibility that they had hit a spectator.

“As can be seen from the video footage, there were many people standing closely in a large row on the left side of the special stage where the crew went off.

“Also, when the car was on its way to rejoin the stage, people were running away to the left and to the right.

“In such a situation, it would have been the obligation of the crew to stop at the venue of the incident and check if a spectator was affected.”

The same incident saw Latvala’s car sustain significant damage and he was forced to retire from the event after the completion of the stage.