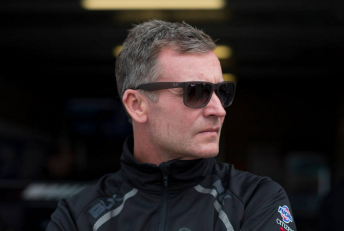 Amid his exit from driving duties in the Carrera Cup Australia, Craig Baird is hopeful of a return to V8 Supercars’ Pirtek Enduro Cup later this year.

Porsche announced on Friday that the Kiwi will take on a Driving Standards Advisor role with its one-make category this season.

The deal was struck after the 45-year-old struggled to find a budget to continue racing in the championship, which he has won five times over the past eight seasons.

CLICK HERE for more on Baird’s exit from the Carrera Cup in today’s Cafe Chat.

Although the end of an era for the veteran, Baird’s racing career is far from finished with Bathurst 12 Hour (Tony Quinn McLaren) and Australian GT (Scott Taylor Mercedes) drives already locked in.

Baird says he’s also in talks to return to V8 Supercars co-driving duties at Sandown, Bathurst and the Gold Coast after missing out on a ride last year.

Although several big teams have already moved to lock in their line-ups, Baird is hopeful that his experience will help him find a place in the field.

“At the end of the day because the enduros are so important for the championship now, the small mistakes a co-driver makes can be very, very costly to the big picture.

“There are some guys out there that can be quicker than me in a V8 Supercar, but I think I can still circulate very close to the pace without too much stress.

“If you look at what Lee Holdsworth and I did in 2013, we finished fourth outright in the Enduro Cup.

“We didn’t have the fastest car and I probably wasn’t the fastest co-driver, but I handed it back to Lee as a very tidy package to get to the end.

“If you look at some of the guys last year, there were some with massive speed in good cars that made silly mistakes.

“That’s not their fault because they’re just not racing enough. It’s very hard for people to get their speed back without stressing the brain too hard.

“That’s one thing I’ve always been able to do, drive within my comfort zone and be there or thereabouts with the other co-drivers.”

Next Story POLL: What is your favourite ATCC/V8SC era?