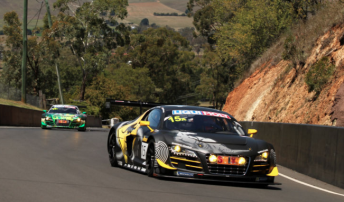 Belgian Laurens Vanthoor and German Markus Winkelhock will return to the mountain next month in a bid to avenge the team’s narrow defeat from last year.

Following a scintillating pole position from Laurens Vanthoor, the Phoenix entry set the pace for much of 2015’s race before being out-gunned by Nissan in the closing stages to finish second.

Vanthoor, 24, has developed into one of the world’s most respected GT aces in recent seasons, with his growing record including the 2014 Blancpain Endurance Series title.

Winkelhock too has a GT title under his belt, the 2012 GT1 World Championship, and like Vanthoor is now a regular for Audi at Bathurst.

Confirming the line-up via his Facebook page, Vanthoor expressed his enthusiasm for tackling Bathurst once again.

“Excited to go back to one of the best track in the world,” he wrote. “And this year we don’t want our party to be spoiled by a big Bentley or Godzilla.”

Davison was announced earlier this month as the Silver rated driver in what promises to be one of the strongest line-ups in the field.

Although with limited recent GT3 miles, Davison has a strong reputation in GT machinery from past stints in Porsches both locally and in Europe.

His European forays included a stint for Phoenix in the German Carrera Cup more than a decade ago.