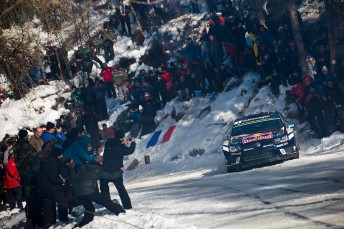 Ogier is nearly two minutes ahead

Sebastien Ogier holds a commanding lead at the Rallye Monte Carlo after his main rival Kris Meeke was forced to retire from the event on a dramatic afternoon in the French Alps.

Although the Frenchman won only one of the five speed tests near Gap, he journeyed south to Monaco with a 1:59.7s advantage over Volkswagen team-mate Andreas Mikkelsen. Thierry Neuville (Hyundai) was 12.5s back in third.

Meeke, who twice demoted Ogier from the lead in an exciting opening two legs, retired from second.

The Briton hit a rock in the middle of the road on the penultimate test, tearing off the car’s sump guard and damaging the Citroen’s gearbox.

“It’s a shame for Kris as he was very fast this weekend and we had to produce a big performance to stay ahead of him,” said Ogier.

“It was an exciting fight. Now it’s a different rally for me, I just have to concentrate on getting to the finish.”

Third-placed Jari-Matti Latvala slid into a ditch in SS11 and broke the front left suspension arm on his Polo R. He made repairs after the test but had no chance of checking in at the next control in time and called a halt.

There is no Rally 2 service facility available in Monaco and so neither Meeke nor Latvala will restart tomorrow.

Mikkelsen dropped over a minute after a bad tyre choice in the morning but recovered to head Neuville by more than a minute.

However, the Belgian’s inspired selection of winter tyres for the final two stages ensured victory in both in Hyundai’s new-specification i20 and he closed in.

He is 2:13.7s behind Neuville and more than three minutes clear of Stéphane Lefebvre’s DS 3.

Lefebvre spun twice but headed Bryan Bouffier in sixth before the last stage.

However, Bouffier broke the rear left suspension arm on his Ford Fiesta RS and used a ratchet strap to try to hold it together before embarking on the long liaison section to Monaco, later retiring. 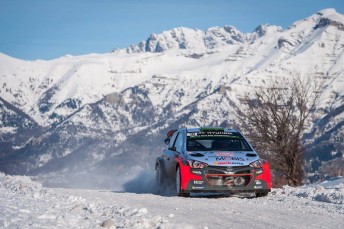 Paddon is gaining experience of the tricky stages

After being forced out yesterday, Kiwi Hayden Paddon sits in 31st although he set times easily inside the top 10 throughout the leg.

“Another difficult day at the office, but a Hyundai 1-2-3 on SS12 was good for the team,” said Paddon.

“A lot learnt today about tyre decisions and least this time we kept it on the road in the icy sections.”

The latter contains the famous Col de Turini, one of the highlights of the WRC season where huge crowds will gather to watch competitors cross the celebrated peak.