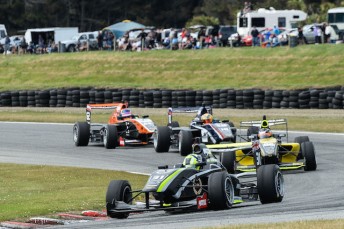 British teenager Lando Norris won the Spirit of a Nation Trophy to take command of the Toyota Racing Series after round two at Teretonga Park.

The 16-year-old, who is the youngest ever winner of a World Karting Championship, started on pole to record a lights-to-flag triumph after the race was interrupted on lap 14 by the sole Safety Car period.

After performing stoutly across the three-race weekend, Norris (M2 Competition) sits at the top of the standings on 380, 34 clear of Markelov.

Starting from pole position Piquet hung on to his lead for each of the fifteen laps.

Norris gained ground on Piquet in the second half of the race but the Brazilian kept a cool head and defended his car-length lead to hang on to the win.

Russian Markelov claimed third ahead of local driver Brendon Leitch who did well to climb to third from fifth early in the race.

In the opening heat Jehan Daruvala timed his run perfectly to take the lead after third restart to beat poleman Norris.

Antoni Ptak was third ahead of Piquet in a race which saw four cars fail to reach the chequered flag.

The race was delayed for nearly two hours after a truck destroyed a section of the pitlane safety barrier.