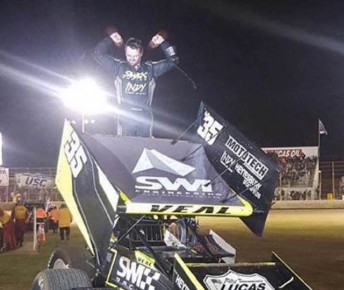 The result has set up a blockbuster Sunday showdown for the greatest prize in Australian speedway.

Despite a sluggish time trial, Veal said the rest of his night was perfect after he placed first and second in his two heat races to qualify on pole for the 30 lap final.

He finished ahead of American duo Kyle Hirst and Randy Hannagan who rounded out the podium in front of another bumper crowd.

Veal, who heads into night three as the top points qualifier, admits he’s never been better placed to win his home town Classic.

“When we finally got going it was a strong performance after struggling in time trials,” the quietly spoken Veal said after his victory.

“I hope we’re back here tomorrow night, it would mean the world to me and my team, bring it on.”

Hirst’s second placing was notable as he bids to defend his Classic title.

“These last couple of weeks have been about building to this weekend,” the Californian said.

“Hopefully we’re in with a show again tomorrow, I’d love to go back-to-back.”