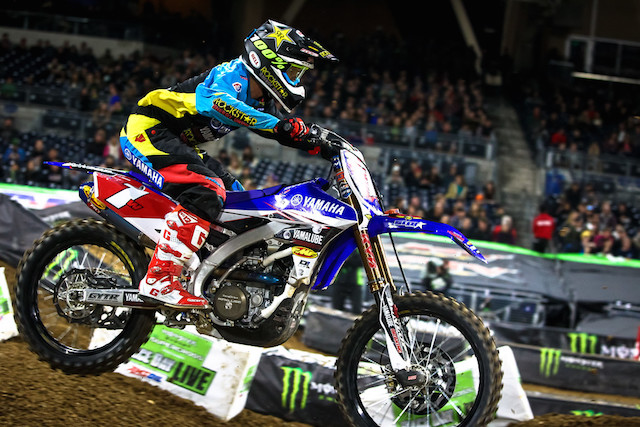 Ryan Dungey and Cooper Webb collected victories as the Monster Energy AMA Supercross returned for a second time to Angel Stadium, Anaheim, in 2016.

Dungey again displayed why he is the defending champion, after engaging in a brief battle with BTO Sports KTM rider Davi Millsaps before taking the lead on lap three and never looking back.

Australian legend Chad Reed on his Factory Yamaha was second.

Reed showed tremendous pace throughout the night, demonstrating he will push Dungey all the way in 2016’s championship fight.

Ken Roczen pieced together a strong ride for third, trailed by Kawasaki’s Eli Tomac and round one winner Jason Anderson in fifth.

HRC Honda’s Cole Seely charged from outside the top ten on the opening lap to finish sixth, whilst early race leader Davi Millsaps settled for seventh.

In the 250 class Star Racing Yamaha’s Webb clawed his way from a seventh place start to capture his third successive victory in 2016.

Husqvarna’s Zach Osborne finished an impressive second with Geico Honda’s Christian Craig in third after an intense battle with Webb.

Craig and Webb engaged in a huge battle that lasted four laps, each swapping positions with aggressive passes, with Webb capitalising.

Kawasaki’s Joey Savatgy endured another frustrating night, falling down whilst sitting in second place, which relegated him to fourth.

Dungey now leads the series with 72 points, followed by Chad Reed in second with 59 and Jason Anderson in third, two points back.

Webb holds a 75-point lead in the 250 class, followed by Zach Osborne in second with 57 and Joey Savatgy in third with 53.

The series now heads to round four inside the O.co Coliseum in Oakland, California.