Ogier got down to business on the Rallye Monte Carlo

Sebastien Ogier got his Rallye Monte Carlo into full stride during a full day of competition to edge a lead over Kris Meeke,

The triple world champion was 9.5sec clear of the Ulsterman after gaining the upper hand in the last of six special stages on mountain and valley roads in the French Alps near Gap.

“It was exciting to have a great battle with Kris. It wasn’t such a bad day, just a small mistake this morning when I touched a bridge and a slow puncture on the left rear in the final stage,” said the Volkswagen ace.

After trailing Meeke by 6.9sec overnight, Ogier regained the initiative in the morning’s final stage. However, the Citroën driver hit back after the penultimate test only to succumb to a super finale from Ogier, who claimed the last win by more than nine seconds.

“There must be something in that stage that Seb knows!” said Meeke.

“I think he lives about 3km from there, so I’m happy to give him that one.”

Andreas Mikkelsen was third until a high-speed spin in the penultimate stage cost a place and knocked his confidence. He ended 25.7sec behind VW team-mate Jari-Matti Latvala, who enjoyed a clean run after suspension issues on the previous night. Latvala was almost a minute adrift of Meeke.

Despite handling issues, Thierry Neuville put his Hyundai ended the day in fifth.

A broken anti-roll bar and an unscheduled trip into a field failed to disrupt Stéphane Lefebvre en route to eighth. Bryan Bouffier was ninth, despite hitting a tree in the penultimate stage, and Ott Tänak was tenth after rolling his Ford Fiesta RS.

Despite bright sunshine and a midday temperature of 6˚C meant the roads were mainly ice free and tyre choice was relatively simple. However, patchy ice caught out Robert Kubica and Hayden Paddon, who retired in the opening stage. Kubica slid into a tree and Paddon broke his i20’s suspension after swiping the same obstacle. 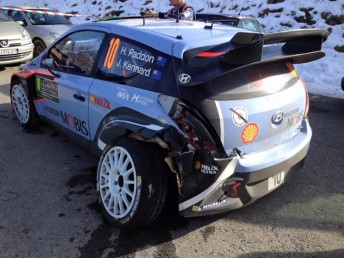 “Monte bites back – a shame to park up but leason learnt,” Paddon posted on his Facebook page.

“A very slow right hander on sheet ice with slick tyres, and just touched a tree on exit of corner. All happened in slow motion and thought nothing of it but unfortunately damage to the wheel means we can’t continue.

“Will do some homework and come back fighting tomorrow, still plenty of things to learn about this unique rally.”

Eric Camilli crashed his Fiesta RS out of eighth on his World Rally Car debut and Lorenzo Bertelli also stopped after hitting a wall. Camilli will not restart tomorrow due to roll cage damage.

Tomorrow is the longest day with 173.96km packed into five stages. It includes two passes through the marathon 51.55km test from Lardier et Valenca to Faye and the classic Sisteron, before competitors journey south to Monaco.