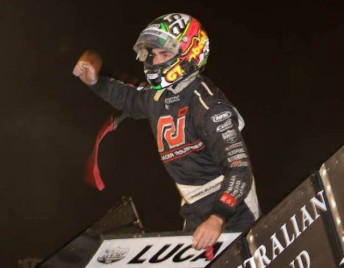 Premier Speedway’s backstretch big screen played a part in the nail biting final laps, with McFadden admitting it prompted him to change his driving line on the final corner, to ensure Madsen couldn’t pass him.

“I had a look at the big screen down the back and saw the 29 (Madsen) there,” McFadden said after the win which delivered a $10,000 cheque.

World of Outlaws star Madsen was convinced he was going to win on the final lap that was played out before a bumper crowd.

“Coming to the white (flag) I thought I had enough to catch him,” Madsen said.

McFadden started sixth while Madsen was directly behind in eighth in the 30 lap final on a lightning fast circuit.

McFadden took the lead from the Northern Territory’s Ben Atkinson with 16 laps to go to set up the epic finish.

Atkinson would hang on for third to complete the podium, ahead of hard charging American Brad Sweet and pole sitter Ryan Jones.

“My confidence is always up, it’s been a good month but this is the big one. I’d love to win the Classic,” McFadden said.

The biggest loser of the night was Sydney’s Daniel Sayre who endured a scary car destroying shunt after riding a rival’s wheel in the C-main.

He emerged unscathed but repairs to the turn 1 fence took almost half an hour.

Next Story Jamie Veal on track for Classic glory