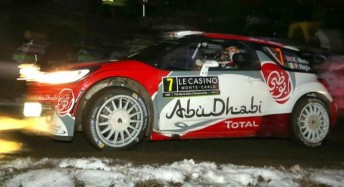 Kris Meeke is the leader of the World Rally Championship opener, the Rallye Monte Carlo, after the opening night’s two stages.

The Frenchman took the opening stage on the Col de Fanget, before the Ulsterman hit back on the following 20.38km test by an impressive 11 seconds.

“We can’t get too carried away, we’ve only done two stages so far! It is difficult to predict what conditions will be like tomorrow,” said Meeke.

“We saw on the road section that the outside temperature had already dropped to -9°C, so we can expect there to be a few patches of black ice on the early stages.”

Ogier lost most of the time over the final five with the road covered in snow and ice.

“I’m happy to be here. This is just the beginning of the rally,” said the VW star.

His team-mate Andreas Mikkelsen kept out of trouble and sits in third place, while Thierry Neuville(Hyundai) is in fourth, followed by another i20 in the hands of New Zealander Hayden Paddon, who is making his full works debut in the event. 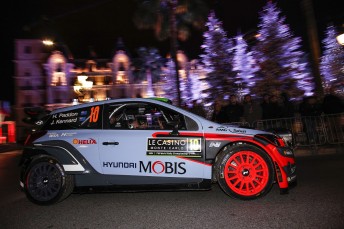 “I took things easy in the first two stages this evening, adapting to unpredictable conditions and just focusing on what we needed to do,”said Paddon.

“I made a good tyre choice in the second stage, being the only driver opting for snow tyres mixed with super softs, which played into our hands a bit at the start but required us to take it carefully on the icy sections.”

Jari-Matti Latvala (VW) had held fourth after the opening stage but hit trouble on the following test and fell to seventh.

“I hit something on the first proper icy section,” said the Finn.

“The car started to slide so I hit full throttle. I think we tagged a bridge or something and I was worried we might have damaged the rear suspension. We took it easy after that.”

The second leg of the event will see a full day’s running with six timed tests on stages that will include dry, wet, snow covered, and ice on what is considered the trickiest of all WRC events.

Next Story Ogier makes his move at Rallye Monte Carlo