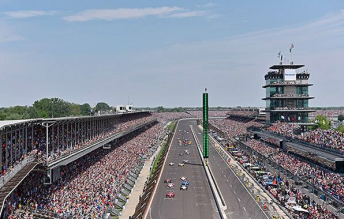 The Indianapolis 500 will have a presenting sponsor for the first time in its 100 race history this May.

Under the agreement the race will be officially known as the Indianapolis 500 presented by PennGrade Motor Oil.

“PennGrade Motor Oil, with its deep understanding of the heritage and tradition that fuels the Indy 500, is the perfect presenting sponsor for the world’s greatest race.”

D-A Lubricant sponsored entries in the 500 from 1955-58 and was an associate backer of Graham Rahal’s IndyCar last year under an ongoing deal.

In other Indy 500 news, 20-year-old Sage Karam is the latest driver to be confirmed for the May 29 race, inking a deal with Dreyer & Reinbold.

Karam made his IndyCar debut in a Dreyer & Reinbold fielded entry at the 500 two years ago, before running 12 races with Chip Ganassi in 2015.

Next Story Q&A: Roger Penske on his motorsport empire