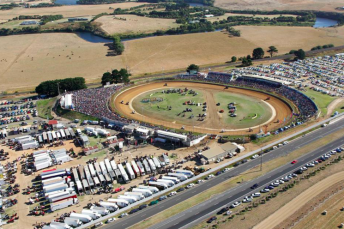 A blockbuster field of 124 – including 11 Americans will contest the 44th running of the Grand Annual Sprintcar Classic which begins tonight at Warrnambool’s Premier Speedway.

The three-night format kicks off a bumper schedule at the venue, which will have an unprecedented seven nights of racing in the coastal town across the next ten nights.

Drivers have come en masse to Warrnambool from all corners of the country, with a special Australia Day race, and the Australian Championships to follow next week at Premier Speedway.

“It’s a carnival, not a race,” the voice of Sprintcars in Australia Wade Aunger said ahead of tonight’s action.

“It’s the whole event – the breakfast, the fan appreciation day, the concerts – the bonus is it’s an awesome race as well, it’s a great week for the sport.”

“For me the Classic atmosphere is as big as it gets,” World of Outlaws star Sweet said as he prepares for tonight’s racing.

“To win these monster races can really set you way above the competition – if you win a race like this weekend you’ve accomplished something seriously special.”

But it’s another American who will start this year’s event the sentimental favourite.

Six time Classic winner, and Knoxville Hall of Fame member Danny Smith will start his 27th and final start in Warrnambool, 20 years after his most recent win in the prestigious race.

For the third year in a row, the huge field will be split into two across the next two nights of qualifying, ahead of Sunday’s final round of heats, and then the countdown to the $30,000 to win, 24 car, 40 lap final.

Aussie Outlaws star Kerry Madsen heads in one of the hot favourites for a fourth Classic, after defending his King’s Challenge title last night at Mount Gambier’s Borderline Speedway.

Speedcafe.com will bring you all of the action from Premier Speedway across the weekend.