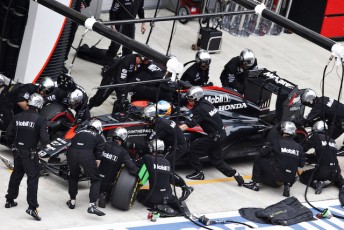 McLaren has revealed that it forced staff to work through Christmas and New Year to meet the FIA crash tests with its MP4-31.

With the calendar seeing the Australian Grand Prix move forward by three weeks from the provisionally planned April start to March 20, McLaren elected to cancel staff leave in order to meet the new schedule.

About 110 employees were involved and offered a ‘competitive Christmas package’ where McLaren ordered eight shifts of work over a five-day period.

“Our entire build program wasn’t lined up for that,” McLaren operations director Simon Roberts disclosed on the team website.

“So we knew we had a problem to solve. In terms of our design and engineering capacity, it’s a relatively straightforward re-planning exercise – there’s less time to get the work done, so everyone works a bit harder.

“But the build schedule is on a critical path – it needs to pass all the FIA safety tests and be ready for the first test, which was also brought forward. In that situation, you can’t just re-plan, you need to do something different.

“It was a bit weird, not having all the time off, but there was a good spirit in the place. It was an incredible effort.”

McLaren earlier this week announced that the MP4-31, a successor to the abysmal performance of the MP4-30 that signalled Honda’s return to the Woking squad, will be unveiled on February 21.

Meanwhile Renault has confirmed that it has passed the mandatory crashing testing requirements set out by the FIA and has taken another step towards returning as a wholly owned entity.

Sauber says its 2016 car will miss the first round of pre-season tests at Catalunya from February 22.

The Swiss-based squad says it will run the old car at the opening round of tests clad in fresh branding until its new car is ready for the second round of tests in early March.