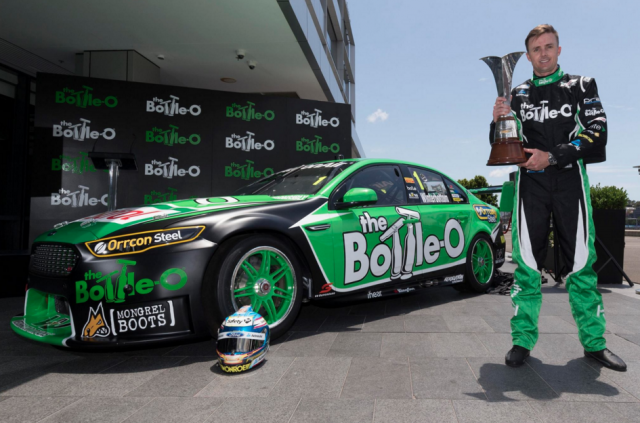 Winterbottom and his #1 Bottle-O Falcon

With Ford USA publicly closing the door on hopes of a V8 Supercars Mustang for 2017, Prodrive says it expects to carry its current FG X Falcons into the Gen2 era.

The final ever Falcon made a stunning V8 Supercars debut last year, winning the title in the hands of Prodrive’s Mark Winterbottom.

Prodrive and DJR Team Penske will both continue to fly the Ford flag this season, despite the company no longer having any level of official involvement.

Recent talks between the teams and the US-based Ford Performance division had left optimism that the factory would return with a new Gen2 package next year, consisting of a Mustang body and V6 twin-turbo engine.

Ford Performance boss David Pericak however publicly quashed the chances of any such backflip at the recent Detroit Auto Show, telling motoring.com.au that V8 Supercars is “not in our future plans” and “not an area of priority for us”.

With no other interested manufacturers ready to fill the void, Prodrive boss Tim Edwards says he expects to see the FG X – and all of its current rivals – continue into 2017.

“We got six years out of the FG and this is only the second for the FG X,” Edwards told Speedcafe.com when asked of next year.

“From an investment point of view, in terms of the time and energy that went into the FG X, if I can get three years out of that work and still have a competitive car I won’t be rushing to change.

“Because Gen2 isn’t mandatory, it just provides options, I think you’ll find the whole category will be running exactly the same cars that they are at the moment.”

While Prodrive’s recent success should make the team attractive to new marques looking into the category, Edwards says he’s not aware of any car companies poised to enter.

“You’re always going to explore opportunities and have dialogue with people, that’s just what we do,” he said of other marques.

“I know that there’s manufacturers sniffing around, but to take someone from that level to being on the grid is a long process.

“Really, if any team wants to change for next year, they’d want to be close to signing contracts now in order to homologate engines and aero and all of that.

“I’m not aware of any teams or manufacturers at that point. That’s why I can’t see anything changing.”

Although having little impact on the squad’s budget due to its dwindling support in recent years, Ford’s exit has seen Prodrive complete a new deal for parts and company cars with the Bayford Group.

The team had previously bought its original equipment items, largely consisting of panels, from Metro Ford in Brisbane under an arrangement organised by the manufacturer.

“Bayfords have been fantastic,” said Edwards of the company, which runs three Ford dealerships in Victoria.

“They are a believer in us as a business and the sport. It’s great to have them onboard.”

While factory funding is naturally coveted within the V8 Supercars paddock, Edwards insists it’s not a vital part of Prodrive’s long-term business model.

A factory deal can effectively allow a team to ‘double sell’ its sponsorship space, earning money for running a certain bodyshape while also sporting an external primary sponsor.

The burden of developing a new technical package has, however, been a clear downside for some rivals, which Prodrive will avoid by sticking with the FG X.

“It’s nice to have an association with a manufacturer but it’s not a necessity,” said Edwards of the long-term picture.

“Sometimes you’ve just got to accept people’s decisions. Ford have made theirs, we’ve accepted it and moved on.

“We think we can be successful running the cars that we have without their support.”