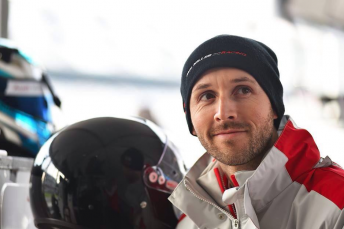 Lowndes has been a late withdrawal after breaking his collarbone in a recreational motorcycle accident on Sunday.

Tander, who tested the car at Phillip Island yesterday in preparation for Bathurst, says he was flooded with contact from available drivers following Lowndes’ news.

“We had to find a replacement driver to share the car.. the phone was pretty busy when Craig announced he was out yesterday,” he said.

“We were on the phone to Germany last night and have secured one of Audi’s top factory drivers in Rene Rast.

“It’s huge shoes to fill, but when you talk about GT racing in Europe this guy is number one.

“It says a lot about the race and how it’s growing that Audi are prepared to send a guy like him out.”

The 29-year-old Rast is a regular in Audi GT3 machinery, competing at the 12 Hour in 2014 with Phoenix Racing.

Rast will be in action aboard a Magnus Racing run Audi at the Daytona 24 Hours later this month before tackling the February 5-7 Bathurst race.

While out of Bathurst, Lowndes is expected to be fit to return to the wheel for Triple Eight’s pre-season V8 Supercars test at Queensland Raceway late next month.