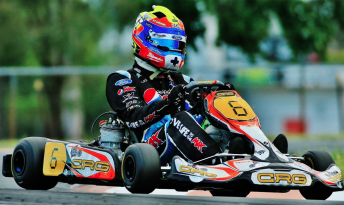 Chaz Mostert behind the wheel of his go-kart as he recovers from injury. pic: Ian Ward

Prodrive star Chaz Mostert insists he has overcome the most painful part of his rehabilitation and is on target to steer a fresh Falcon FG X chassis at a planned team test next month.

Mostert has spoken about the pain and rigorous daily physio regimen he has endured since disposing of his crutches.

Learning how to walk again, Mostert says his recovery has progressed smoothly since his horrifying Bathurst qualifying crash last October.

Surgeons inserted a pin in his left femur on Saturday morning after the sickening Friday shunt in the run to Forrest’s Elbow. He also has a broken left wrist.

Mostert had won five races last season and was on track to push team-mate and eventual champion Mark Winterbottom for the title.

“There was a lot of pain early,” Mostert told Speedcafe.com.

“Letting things heal was probably the painful part and the movement when bones and ligaments are trying to heal.

“Trying to learn how to completely walk again. Your muscle deteriorates so quickly in your leg when you don’t use it.

“To build strength it needs some pumping action and when you haven’t done that for a couple of months everything deteriorates.

Mostert remains philosophical about how the crash and injuries harpooned his championship drive in 2015.

“I think everyone has got those sort of stories of something going wrong with their car towards the end of the year or has a crash,” he said.

“I still hope I’ve got plenty more years left in me for Supercars to have a crack at it.

“It was just a privilege to be running up the pointy end with such a great car.

“So it was really good just to be involved in it all.” 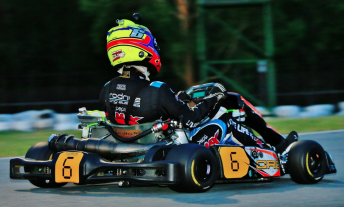 Mostert says he will still have a limp at the Clipsal 500. pic: Ian Ward

On the eve of the 2016 season, Mostert remains guarded about picking up where he left off before the Bathurst shunt.

“It’s not just one team that’s pushing us and Red Bull came back really strongly towards the end of last year,” he said.

“Each year is a different year. The level is getting higher and higher and we’ve just got to keep getting better and better.

“We’ll have our work cut out for us again. It’s not going to be easy even though sometimes it might have looked easy last year it really wasn’t.

“Jamie (Whincup) will come even stronger because he lost the title last year.

“But I’m just happy to be recovering and to be part of it again.

“Clipsal is probably one of the hardest to come back to because of the heat but I just can’t wait to get back out there.”

Mostert’s progress has seen him regularly jump behind the wheel of his go-kart at Ipswich in the New Year.

“Now that I’m healing I’ve been putting myself through some go-karting a couple of times a week,” he said.

“It obviously helps keeping your eye in and it’s such a great community as well.

“CRG Australia and the guys at the Ipswich Kart Club have been fantastic.

“From now on until the test day I will be in the gym every day to try and get every bit out of it as I can.

“I think I will be fine to drive a V8 Supercar.”