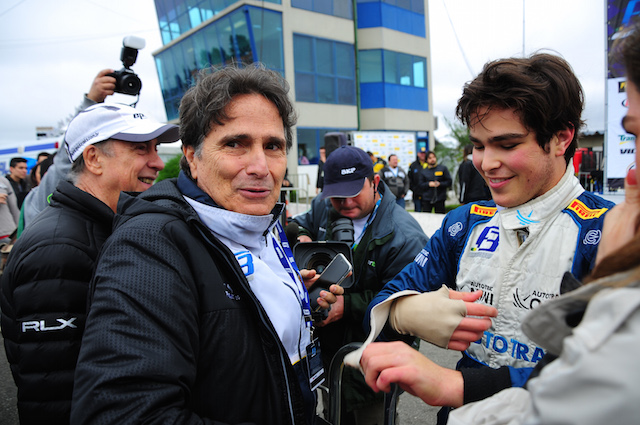 The 17-year-old opened his 2016 TRS account at a wet Ruapuna, Christchurch, last weekend to mixed results racing the #5 his famous father used for the majority of his grand prix career from 1978 to 1991.

Piquet snr, who claimed F1 World Championships in 1981, 1983 and 1987, is in New Zealand guiding the teenager through the TRS which runs across five consecutive weekends.

“It’s getting the mileage in the car,” Piquet snr said of his son’s progress.

“Time will tell how far he goes in the sport and if he gets to Formula 1.

“I will try to help him as much as I can. The boy has to learn.

“Europe will be like this. He hasn’t had much wet weather driving at home.”

Pedro Piquet sits seventh in the TRS standings after the first of the three-race weekends.

He previously competed in the class in 2014, struggling for competitiveness before licensing issues halted his campaign after three rounds.

Subsequently gathering experience in Brazilian F3 and Carrera Cup racing, Piquet is preparing to step up into the cut throat European F3 Series this year.

The youngster concedes that he won’t make it to the top on reputation alone.

“The name won’t do it,” said Piquet junior.

“I’ve got to prove myself on the track.

“Maybe my sponsors get a bit more attention because of the name, but I’ve still got to perform.

“All the things Dad went through are happening to me now, but he can help me deal with it.”

Older brother Nelson Piquet jr was booted out of the Renault F1 team in 2009 after it was discovered he had carried out an order to deliberately crash during the 2008 Singapore GP to help team-mate Fernando Alonso win.