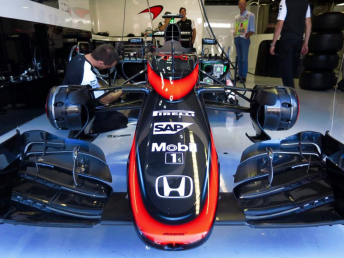 McLaren endured a horrid 2015 with its Honda powered MP4-30

The car that will carry McLaren’s hopes for the 2016 Formula 1 season is set to be unveiled to the public on February 21.

McLaren is the first team to confirm its launch plan ahead of the new season, which kicks off with a test at Circuit de Catalunya the following day.

The British team and its new MP4-31 will be under heavy scrutiny after a shocking first year for the squad with new engine partner Honda.

The team has vowed to continue its aggressive ‘size zero’ packaging with its latest car, despite questions over the tight layout’s impact on the Honda power unit.

Confirmation of the launch date follows an announcement that McLaren has recruited Volkswagen Motorsport boss Jost Capito to the role of CEO of its Formula 1 team.

Capito will succeed Jonathan Neale, who had filled the role of acting CEO for two years and will shift into the top job at the McLaren Technology Group.

“I first approached Jost last summer,” explained Dennis of hiring Capito, who has led VW to consecutive World Rally Championship titles in 2013, 2014 and 2015.

“He is an extremely impressive, competitive and ambitious individual, who comes to us with a very wide range of automotive and motorsport experience, encompassing senior positions at BMW, Porsche, Ford, Sauber and, since 2012, Volkswagen.

“I am certain that he will work extremely well with Eric and all at McLaren Racing, building on the very good work they have already done to take the McLaren-Honda programme forward towards Grand Prix victories and world championship successes.”