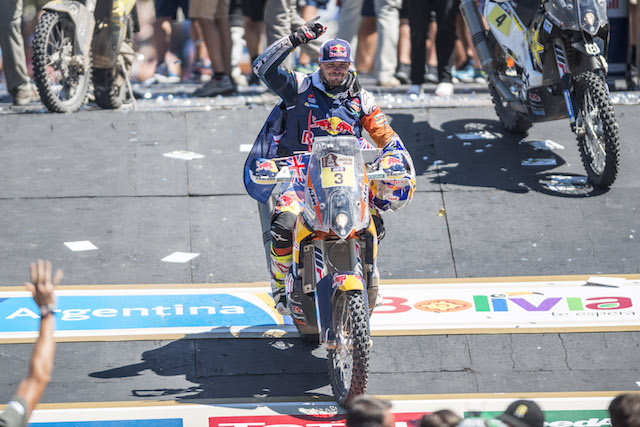 Tackling over 9000km of harsh and inhospitable terrain in extreme weather conditions offers few challenges comparable to what other athletes experience in top level competition.

For Price, latching onto the Dakar trophy stands as one of the greatest achievements by an Australian sportsperson.

The 28-year-old from Newcastle is physically spent after his Dakar ordeal which he says will take a month for his battered and bruised body to fully recover from.

Price gave a compelling insight to Speedcafe.com editor-in-chief Gordon Lomas on his epic adventure a day after reaching the pinnacle of international offroading. 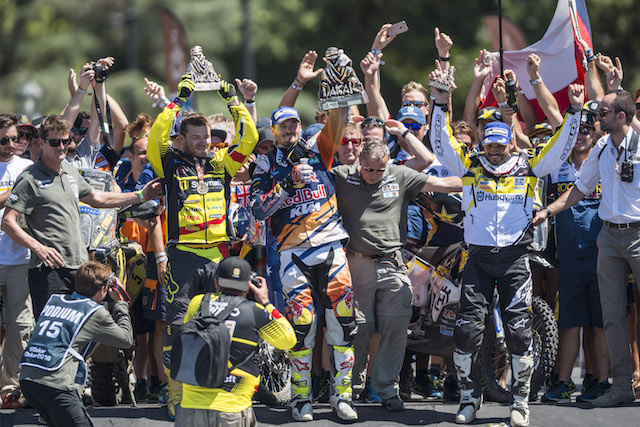 SPEEDCAFE.COM: How does it feel 24 hours after becoming Dakar champion. Has it really sunk in yet?

TOBY PRICE: Definitely not at all. I just drove three hours (from Rosario) to get to the airport in Buenos Aires and sitting there looking at the trophy in the car, I still can’t process it and can’t believe it.

For sure it’s an exciting thing; good for myself and good for Australia. 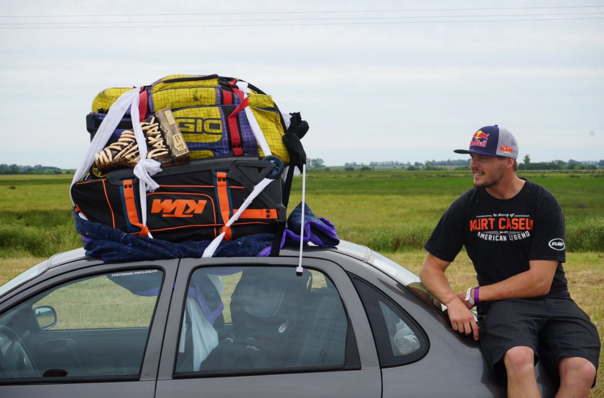 SPEEDCAFE.COM: You’ve scaled the biggest pinnacle there is in offroading so it just must be an unbelievable feeling?

The Dakar has been going a long time and no Australian had won this race before.

So to be the first guy to do that and have my name on that list with all those legends – Marc Coma and Cyril Despres who have dominated Dakar since 2005, and being an Aussie is mind blowing.

It’s good for myself and for motorsport in Australia. 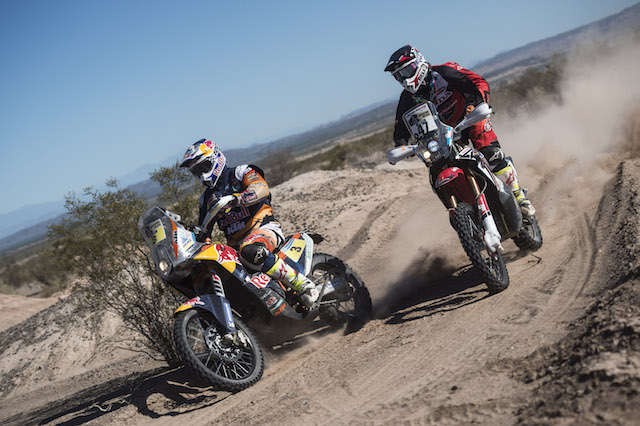 SPEECAFE.COM: Give us an indication of what it was like riding for the KTM factory team for the first time as opposed to your Dakar debut last year?

PRICE: To be a part of the KTM Red Bull factory team they have got everything I need. All the right tools and all the right people in my corner.

To have those guys do the work, I know I’m on the best equipment we can be on so it just makes my job a little bit easier.

So to repay them back from taking a gamble with me, I’m so excited not only for myself but my family and friends.

It’s good to be the first Australian to do this and have my name now in the record books as winner of the Dakar Rally.

SPEEDCAFE.COM: The physical and mental demands must be immense and beyond a lot of people’s comprehension. How do you deal with that over the course of the two weeks?

PRICE: It’s very hard to try and explain what you go through in this race.

Two weeks of racing and 9500km so to put your body through this, it’s not only high temperatures and cold temperatures, there is high altitude which makes a lot of people sick and people fall asleep on the motorcycle.

I think we reached an elevation of 4800m this year which is kind of half what an aeroplane flies at and you are struggling to breathe.

Your body is getting just no oxygen. To put yourself through this for two weeks; unless you actually do it yourself it’s so hard to explain to someone what the body feels like.

My body now is going into a bit of a shutdown mode and just wants a break and wants to relax and chill out. 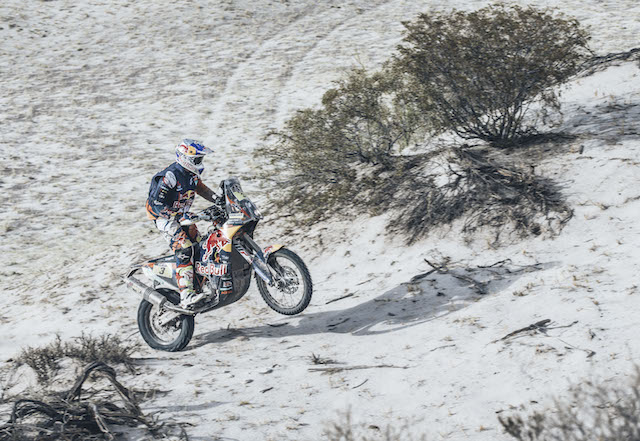 Price backed up his raw pace with brilliant navigational skills

SPEEDCAFE.COM: On top of all that there must be a lot of tricky navigational stuff to deal with constantly as well?

PRICE: For sure. Trying to process these notes sometimes you are in the middle of the desert or the sand dunes there are no reference points around at all.

Everything looks exactly the same and you just process the notes and to try and find the waypoints you have to follow all your headings and bearings and things like this.

To try and do this all at once and ride your motorbike and deal with high altitude it’s so hard to process these notes at this pace.

It’s more dangerous this race than texting and driving in your car, that no-one should be doing anyway, which is the worst way to explain it but it takes your mind off what you need to do doing.

SPEEDCAFE.COM: How was the celebration after the finish in Rosario. Did you have chance to celebrate with the team?

PRICE: Yeah. The celebrations were crazy. The team worked extremely hard for this race.

To hear the guys last night they compared it to a MotoGP season or a Formula 1 season so they rate Dakar right up there.

They worked hard and they partied hard.

But I didn’t celebrate so much. I was in bed fairly early because I was pretty tired and done for the day. 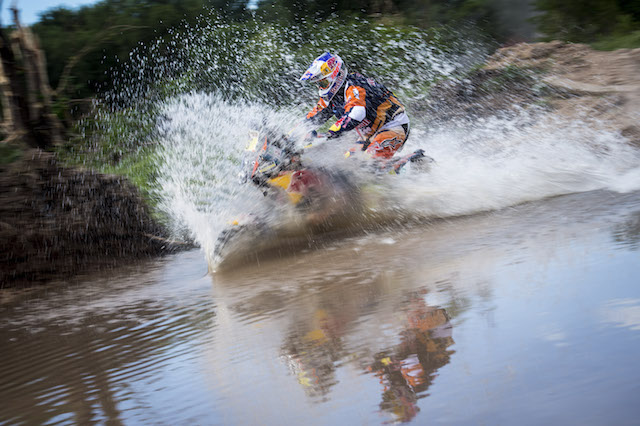 SPEEDCAFE.COM: From a physical point of view, how long would it take to recover from performing in such a brutal endurance test such as Dakar?

PRICE: My trainer says it takes about a month for the body to fully recover from this.

We’ll still do some light training and bits and pieces but we definitely won’t be slogging away at the body because it would just drive you into the ground.

I just definitely need to relax a little bit and let the body catch up.

In a month’s time we’ll definitely be pushing full gas to be ready and go racing again. 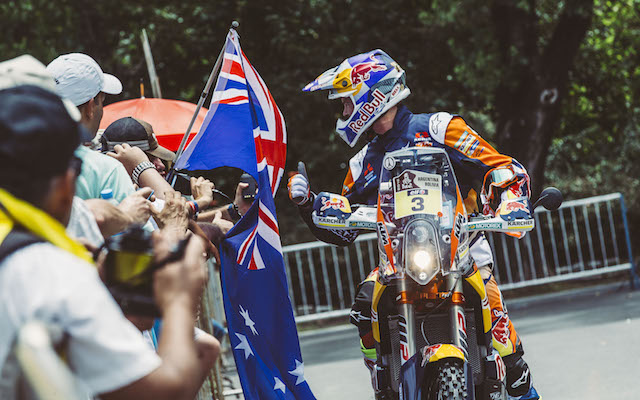 SPEEDCAFE.COM: Looking at the pictures of the event, there looked like there was a lot of Australian support in the crowds along the way.

PRICE: Definitely. This year there was a lot of Australians there.

There was a lot of people who came for the adventure and to follow my progress along the way and it was really cool to see.

At the end of the stages to see the Australian flags waving was encouraging.

My team-mates noticed that there were a lot of Aussies here.

I think we have got a pretty good fan base in Argentina as well.

On the track there was a lot of people were wearing Wallabies jerseys and everything.

SPEEDCAFE.COM: What’s your next assignment?

PRICE: KTM is now going to take us on a couple of little trips to say thank you for the work we’ve done with the Dakar win.

I get back into Australia on January 25 and now we are just going to relax and chill a little bit and go and experience a few things.

My next programmed rally is in Abu Dhabi around March/April.

And at the start of March I will be part of the Clipsal 500 in Adelaide and be the face of the enduro cross there.

I will also be definitely back in a truck (Robby Gordon’s Super Trucks) and move into some four wheel action.

Clipsal is an awesome event and we’re looking forward to it again.

It’s a big event that I can bring the Dakar trophy to and hopefully a lot of people will want to come and catch up and talk and hold this trophy.