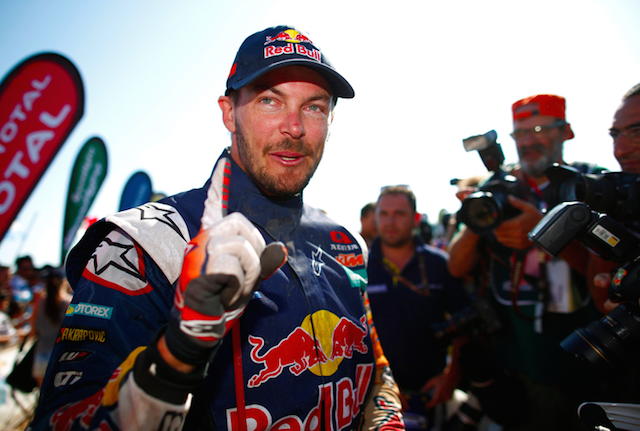 Red Bull KTM factory ace Toby Price has climbed the pinnacle of offroading to become the first Australian to win the Dakar Rally.

Price used a combination of brains and brawn to conquer the world’s most feared and revered rallies, meticulously measuring his attack across 13 special stages.

Dodging the many perils of Dakar which was staged in Bolivia and Argentina, the 28-year-old became the toast of motorsport’s version of the Tour de France.

The Hunter Valley sensation was sublime in victory following his third place in last year’s edition of Dakar at his first attempt.

Going into the 13th and final stage comprising of a 180km run from Villa Carlos Paz to the finish at Rosario, Price had 37 minutes 39s up his sleeve but left nothing to chance, playing it smart to the bitter end by finishing the run in fourth.

“Being the first Australian to win the Dakar is just insane,” a jubilant Price said.

“This is incredible for my family, my friends and my fans back in Australia!

“Finishing the rally is already a triumph. Winning it is amazing! I tackled the race in true Aussie style.

“I attacked when I had to, when the time was right, and I kept an eye on my bike during the all-important marathon stages.

“I also navigated rather well. I hope this is just the start, to win again. It won’t be easy, so I’ve got to savour this victory.”

The 13th stage was won by Sebastien Loeb in the Peugeot DKR 2008 with the decorated WRC champ finishing ninth outright in a rollercoaster Dakar debut.

Peterhansel found it hard to hide his emotion after feeling extreme pressure in the closing stages.

“Crossing the finish line was a release after the extremely stressful last three days,” Peterhansel said.

“I’m also delighted to write a new page in the history of Peugeot because the guys in the team have been working their socks off for two years.”