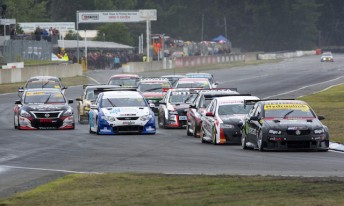 Andre Heimgartner returned to the BNT NZ Touring Car Championship by capturing the round win at the fourth event of the championship at Ruapuna.

Heimgartner claimed two race wins and a second placing in the final race of the weekend, which was won by championship leader Simon Evans.

Evans’ race three win may have been jeopardy following a lap one clash with the Scott Taylor but a post race investigation deemed it a racing incident and no penalty was applied.

For Heimgartner, who returns to the championship after a year of competing in the Australian V8 Supercar championship, says it was a pleasing weekend in what were wet and trying race conditions over all three races.

“It was a tricky weekend, the weather certainly played a part. It was a fun weekend though, we didn’t finish a single race with the same conditions that we started with, I really enjoyed it,” said Heimgartner.

Race three was a reverse grid, which saw Heimgartner start from the rear of the field, forcing him to push hard in the early stages of the race.

“I made some good places off the start, but then found myself caught up in the Evans/Taylor incident and was then almost last again, so I had to battle through the pack to get back up the front.”

“Simon is driving really well at the moment, so it’s nice to be able to come and challenge him. I’m really looking forward to Teretonga next weekend where we can have another go.”

In class two, the weekend was largely dominated by series newcomer Sam Barry (Waipukurau) who qualified on pole and scored a race win and a second place in the weekend’s opening two races.

However his points lead was short lived when he failed to finish race three after he was caught up in a multi car incident at turn one, which ended his weekend in the sand trap.

The class two race three win eventually went to Wellington’s Brock Cooley, which saw him tie on round points with Invercargill’s Liam MacDonald.

The round win went to MacDonald based on a higher qualifying position from earlier in the weekend.

With MacDonald only competing in part of the championship, it is now Cooley who has his eye on the class two championship.

“It was a great weekend for us in the Speedy Signs Ford. We banked some valuable points for our championship campaign, and we’re now leading it. I’m really pleased with how the weekend has gone,” said Cooley.

“Brad Lathrope is still in the championship hunt, so we’ll have to be mindful of him going forward and make sure we continue to finish ahead of him and maintain that margin.”

The BNT NZ Touring Cars are scheduled to return next weekend at Teretonga.