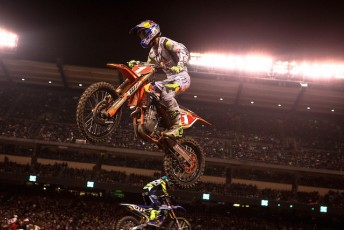 Ryan Dungey and Cooper Webb have each collected victories in Round 2 of the Monster AMA Supercross Championship at San Diego’s Petco Park.

Webb’s racecraft would once again be put to the test for round two, as the Star Racing Yamaha rider completed the first lap of the 250 main a lowly tenth place.

From there, Webb sliced his way through the best 250cc Supercross riders in the world to record his second victory of 2016.

Monster Energy/Pro Circuit Kawasaki’s Joey Savatgy earned the holeshot in the main event, however was snapped up quickly by a pair of Geico Honda teammates in the form of Jordon Smith and Jimmy Decotis.

Smith led the race up until lap six; when Rockstar Energy Husqvarna’s Zach Osborne made an aggressive pass for the lead. Osborne led until lap 11 before Webb completed his resurgence to the front and took the lead.

Christian Craig put his Geico Honda inside the top five, with a fourth place finish being a career best for the San Diego native.

Zach Osborne would eventually finish sixth after a late race fall, followed by Kyle Peters, Jimmy Decotis, Kyle Cunningham and Chris Alldredge to round out the top ten.

In the 450cc class, it was Australian hero Chad Reed picking up the holeshot aboard his new Factory Yamaha.

After a brief battle amongst the field, Red Bull KTM’s Dungey emerged as the race leader, with Reed hot on his heels as they quickly separated themselves from the rest of the riders.

Reed trailed Dungey by no more than three seconds for 17 of the 20 laps, as Dungey put in a faultless ride to capture the chequered flag first.

Last weeks winner Jason Anderson finished third, however after officials reviewed his race, they noticed that he had jumped an obstacle illegally.

Subsequently, Anderson had two positions added to his third, relegating him to fifth.

Ken Roczen once again endured a frustrating night, running in third place early in the main before a costly mistake relegated the title hopeful to sixth place on the night.

Dungey now retakes the series points lead and the red plate from Anderson, as the Monster Energy Supercross championship now heads back to Angel Stadium in Anaheim for round three of the series.