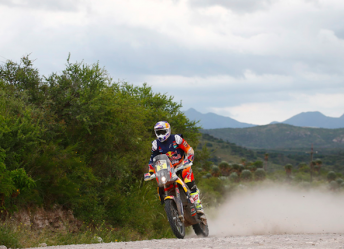 Red Bull KTM factory rider Toby Price is tantalisingly close to creating history in the Dakar Rally after the penultimate stage in Argentina.

Price will enjoy a lead of more than 37 minutes going into the final stage tomorrow.

Escorted by Antoine Meo from the start of the special, the Australian made sure he avoided any mistakes to complete the 481 kilometres of the special.

Bad luck befell Antoine Meo who had escorted Price out from the start of the stage after he was under instruction from the factory team to provide protection and assistance to the New South Welshman.

The Frenchman suffered an injury to his hand after a heavy fall less than 50km from the finish, eventually ending 38 minutes behind the stage winner which saw him slip three places.

The stage victory went to Helder Rodrigues (Yamaha) who climbs to fourth overall.

Price said he decided not to fight Rodrigues who had passed on him the stage, mindful of protecting his tyres.

“It was really sketchy, really skatey and it felt like I was riding on ice,” Price said. 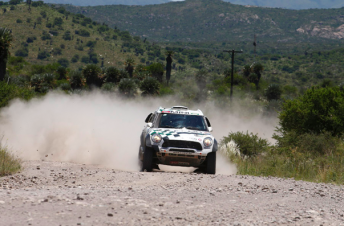 Mikko Hirvonen took his maiden stage win in the Mini

“We had a couple of excursions off the track a couple of times so we thought we’d whack it down and make sure that we get to the finish.”

In the car category, Stephane Peterhansel remains on track to record a 12th Dakar win in his Peugeot DKR 2008.

Peterhansel was sixth in the stage and goes into the run leg with a 41 minute lead.

The stage was won by Mini driver Mikko Hirvonen who remains a chance to spring from fourth overall and claim a podium.

The final leg comprises a 180km run from Villa Carlos Paz to the finish at Rosario.