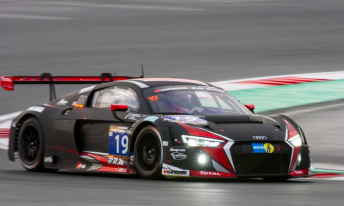 Audi ace Laurens Vanthoor has taken the chequered flag to win the Hankook 24 Hours of Dubai, clinching the race by five laps.

In a shootout for the new generation of GT3 machines, Vanthoor and co-drivers Michael Meadows, Stuart Leonard and Alain Ferte produced a near flawless display in the R8 LMS.

It was the first victory for Audi in the race with the Belgian WRT team saluting at their first appearance in the twice-around-the-clock event.

The Abt Audi driven by Christer Jons, Andreas Weishaupt, Isaac Tutumlu, Matias Henkola and Daniel Abt were third.

A high profile casualty after being in a strong position was the Land Motorsport Audi R8 co-driven by Christopher Mies which was eliminated within three hours of the flag with a gearbox failure after earlier running out of fuel.

Martinsson had to be cut from the wrecked Ginetta and is recovering in a Dubai hospital after suffering suspected broken ribs.