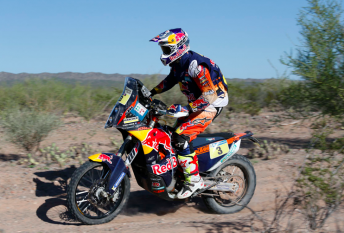 With two stages remaining Price has chiselled out a lead of more than 35 minutes over fellow KTM competitor Stefan Svitko.

The 431km stage was taken out by Frenchman Antoine Meo who now sits third overall on another KTM.

Price’s chief rival earlier on in the rally, Paulo Goncalves (Honda) has withdrawn after falling.

Another risk-free and heady ride by the New South Welshman sees him blow his margin out by more than 12 minutes on the previous stage.

The times and positions were confirmed despite the bikes and quads being stopped at Checkpoint 2 after 243km owing to the oppressive heat.

The thoroughly impressive Red Bull KTM factory rider gave an insight into how tough it was under the intense heat.

“We started third and at about the 180km mark we got on to the front and led the way. The most difficult part was how hot it was,” Price said.

“We’re another day closer, but for sure, it’s been a hard one.

In the car category Stephane Peterhansel continues his relentless march to a 12th victory as his Peugeot team-mate Carlos Sainz has retired.

Peterhansel holds an advantage of more than 50 minutes ahead of Mini driver Nasser Al-Attiyah.

The rally is now preparing for Stage 12, the longest stage of the event at 481km from San Juan to Villa Carlos Paz marked with semi-mountainous terrain which vegetation marking the edges.