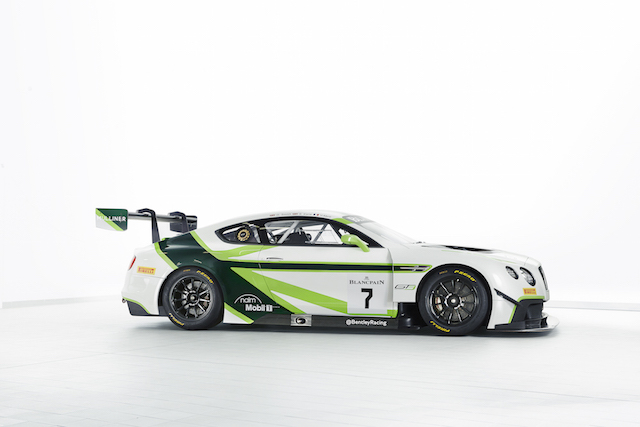 David Russell has been confirmed as part of the Bentley Team M-Sport driver roster for the Liqui Moly Bathurst 12 Hour from February 5-7.

The British factory squad announced Russell’s place in the team as it unveiled its Mount Panorama livery at the Autosport International Show in England.

Returning for a second tilt at the 12 Hour, Bentley has enlisted Russell as part of its six-driver roster.

Russell will combine with Belgian Maxime Soulet and Andy Soucek in the #31 machine while the #10 Continental GT3, driven to a hard-fought fourth place last year, will again be steered by Guy Smith, Steven Kane and Matt Bell.

“It is a major highlight of my career to join such a prestigious and successful international GT team as Bentley Motorsport,” the Brisbane-based Russell said.

“Having visited the team in action at the Spa 24 Hour last year and during my test day at the Sepang 12 Hour last month, Bentley Motorsport is an outstanding operation that competes to win.

“It is a privilege to be the team’s sole Australian driver at Bathurst, where I have enjoyed some great races over the years in sportscars, V8 Supercars and in production cars.

“I will be doing all I can to help deliver Bentley a historic first Bathurst victory in February.” The GT3 machines will see fresh livery that is dominated by splashes of green with design elements hinting at the Union Jack flag.

“We return to Mount Panorama looking to get the podium result that we so narrowly missed out on last year,” Bentley’s director of motorsport Brian Gush said.

“As with any new event for the team, we went there looking to learn as much as we could so we could go back better in year two.

“Our line-up is very strong and David Russell’s experience here should help us immensely, so we’re feeling quietly confident.”

The vastly experienced Smith, who won the Le Mans 24 Hour in the Bentley Speed 8 in 2003, is eager to return after unluckily missing a podium finish last year.

“Once you have raced in Bathurst 12 Hours you have an overwhelming desire to go back and conquer it,” Smith said.

“We came so close last year and, although it was disappointing to so narrowly miss the podium, it has given us confidence for our return.”

Next Story Q&A: David Russell on his Bentley factory drive