David Russell has infiltrated the Bentley M-Sport squad by claiming a prized drive for the Liqui Moly Bathurst 12 Hour.

Russell and his manager Paul Marinelli had worked for more than a year on getting the deal over the line.

The one-off drive will see Russell team with Andy Soucek and Maxime Soulet in the #31 Continental GT3.

The Brisbane-based racer talks about what he describes as a highlight of his career with Speedcafe.com editor-in-chief Gordon Lomas.

SPEEDCAFE: You’ve already tested the Bentley at Sepang late last year. Tell us a bit about how you found it.

DAVID RUSSELL: I had a chance to sample the car at Sepang when they ran the 12 Hour. There was a session which was just like open practice so I had some laps in the car.

It means that heading into Bathurst with a car which has different characteristics to what I’m used to; it was good to get a good understanding and feel and look at some data before the 12 Hour.

SPEEDCAFE: What are some of the differences that you found with other GT cars you’ve driven before?

RUSSELL: Firstly its right-hand-drive so that’s a no-brainer. But it’s a lot about driving position and braking feel.

Because you are sitting further back in the cabin its just about getting the feel of the car’s handling mainly. 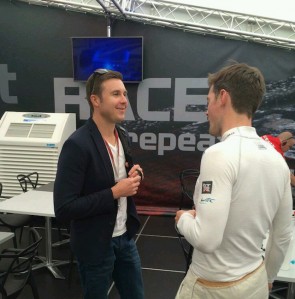 SPEEDCAFE: You’ve known about this deal for quite a while now so it must have been a challenge to keep it under wraps?

RUSSELL: Yeah absolutely. And it’s a credit to Paul Marinelli who has put a lot of hard work into developing my international GT career to try to get some more drives.

I’ve been lucky enough to do the Spa 24 Hour, Dubai and Sepang and my races in Europe (ADAC Masters) last year which were all very strong performances.

But yes it’s been difficult to keep under wraps.

SPEEDCAFE: Both the Bentleys last year were very quick so they are a genuine podium contender second time around.

RUSSELL: Both entries are very strong and I think I have a lot to bring to the team.

Obviously my experience there will be able to help contribute.

The guys were there driving the cars last year and I was just starting to develop a relationship with the team.

I certainly can’t wait to drive the Bentley around the mountain. It’s going to be very special.

SPEEDCAFE: The other drivers are very well credentialled, how have you been accepted into the squad?

RUSSELL: When I met the guys in Sepang it’s sometimes easy to catch up as a driving group and being the new guy feel a bit of resistance.

But those guys were so welcoming and it feels good when you are welcomed into the team in that way from the other drivers.

They were straight into working together and getting my thoughts on the car.

It was great the way that they welcomed me into the Bentley Boys squad.

SPEEDCAFE: Do you know if you would be a chance to qualify the #31.

RUSSELL: I certainly don’t know those details yet. Coming in we will go through our test protocol and see how things progress from there.

But that decision would certainly be up to the team and the engineers.

SPEEDCAFE: I take it gaining a spot in a factory team and for an iconic British marque would be a huge career highlight?

RUSSELL: To join a team like Bentley and M-Sport is definitely a great opportunity and a highlight for me.

The team is so professional and great to deal with.

SPEEDCAFE: So what does the rest of the year entail for you at this stage?

RUSSELL: There’s a few things we are working on like most categories it’s trying to make sure you are in the most competitive seat to do as well as you can.

There’s some opportunities in the Australian GT Championship and also Porsche Carrera Cup, while my commitment to the V8 Supercar enduros remains as strong as ever.

We’ll just see how the next few weeks pan out for us.

There’s some opportunities in Asia but my hope would be to do a lot more GT racing in Europe and in the USA as well.

If that could be with Bentley that would be fantastic.

SPEEDCAFE: You finished seventh with Roger Lago and Steve Owen in the Lamborghini in the Bathurst 12 Hour last year. What’s the situation with you and the Lago team going forward?

RUSSELL: I spoke to Roger and told him of the opportunity and he was obviously happy for me. There’s certainly no problems there.

There’s still the Spa 24 Hour with Lago Racing and I’ve got a great long term relationship with Roger and the whole team.

He knows that I’m grateful for the opportunities and the races we’ve done together in the past as well.