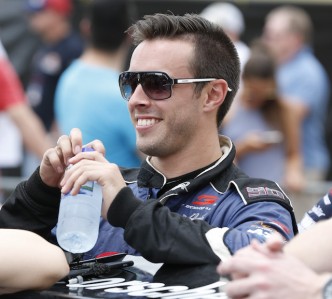 Shae Davies will link with Matthew White’s Dunlop Series squad for the 2016 season.

The move co-incides with the first year the second tier V8 Supercar category will field Car of the Future chassis.

“2016 will be a very different DVS year with COF (Car of the Future) chassis’ being allowed into the championship and I feel sure that Matt (White, team boss) will have a very competitive package,” Davies said.

Davies will embark on his second year in the DVS after moving from Matt Stone Racing last season.

The 2013 Kumho Tyres V8 Touring Car Series champion is concentrating his efforts on the DVS after combining his Dunlop races last season with selected appearances in the Australian Carrera Cup Championship.

“After evaluating all possibilities I’m convinced MW Motorsport is the right place for me,” Davies said.

“I was happy to claim top rookie status in last year’s championship and now have my sights firmly set on podium finishes and securing my first Dunlop Series race win.”

White was impressed with the 25-year-old’s performance in the Dunlop Series last season and also with his pace alongside Max Twigg in the Erebus Mercedes at the Highlands 101 meeting late last year when the pair finished fourth.

“Shae displayed some very promising signs last year in the Dunlop Series and his appearance and pace in the Erebus Mercedes GT machine in New Zealand really captured our attention,” White said.

“We look forward working with Shae and helping him take the next step in V8 Supercars.”

Davies joins Darwin’s Bryce Fullwood at MW Motorsport with White looking at campaigning up to four cars in the DVS this year.