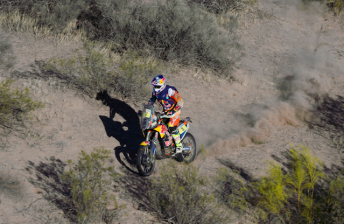 Toby Price extends his Dakar lead after the shortened Stage 9

Australian whiz Toby Price has again flexed his muscles to increase his advantage after the ninth stage of the Dakar Rally.

As good as Price was in the looped Belen run, the shortening of the stage due to extreme heat cost him the chance of blowing his lead out even further.

Price sits more than 24 minutes ahead of fellow KTM rider Stefan Svitko with the Australian’s chief rival Paulo Goncalves falling down the order after a branch speared a hole in his radiator.

However the Honda rider is not entirely out of the running for overall honours as he stands to be given a grouped time along with all the other riders who stopped at the second checkpoint.

Mastering the tricky navigational conditions, Price admits that his lead should have been greater had it not been for the stage amendments.

“I get to the finishing line and then they cancel the rest of it… that’s a bit of a shame, but that’s the way it is,” Price said.

“We’ll just have to wait and see what call they come up with.

“It’s a bit of a bummer for me. I have to get to the finishing line and I’ve done that, but they’ve called it.

“I guess that’s just the way it is. It’s job done today, but everyone’s got lucky since we’ve stopped at CP1 and CP2.”

Carlos Sainz has bounced back into the lead of the car category, claiming the shortened stage by 10s over Mini pair Erik Van Loon and Mikko Hirvonen.

Sainz has turned the tables on his Peugeot team-mate Stephane Peterhansel, seizing a seven minute advantage.

Peterhansel struck trouble with punctures and becoming stuck in sand, losing nine minutes which was enough for him to relinquish the overall lead in the DKR 2008.

The Dakar continues with Stage 10 from Belen to La Rioja with 278km of special sections that is laced with heavy sand.