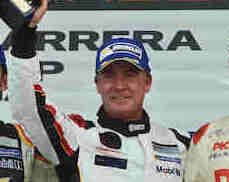 Craig Baird will combine with father and son Tony and Klark Quinn in a McLaren 650S GT3 in the Liqui Moly Bathurst 12 Hour from February 5-7.

A day ahead of organisers releasing what is believed to be the bulk of driver line-ups, Speedcafe.com can reveal Baird is confirmed in the McLaren.

Aiming for a second victory in the event following his 2007 success alongside Paul Morris and Garry Holt in a BMW 335i, Baird is excited about the prospects.

“In the starts that I’ve had in the 12 Hour I think I’ve only finished off the podium twice,” Baird told Speedcafe.com.

“I’ve always had a fairly good run there. It doesn’t matter whether you are doing GT or the 12 Hour the biggest thing is you don’t want to fill your car full of heroes.

“As Crompton (commentator Neil) always says you’ve got to buy a ticket for the last hour. There’s no use being a hero for the first hour and throwing it all away.”

Entered under the Mishumotors moniker, the entry will be run by Erebus Motorsport.

The Class A driver list is close to completion with the Bentley and Nissan factory efforts among those expected to finalise combinations in the coming days.