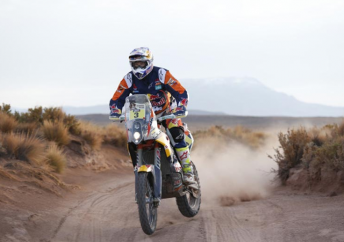 Australian Toby Price is making a decent fist of the Dakar. Can he claim the top step of the podium?

With the gruelling Dakar Rally set to come to a dramatic conclusion this weekend, Australia’s rising international offroad motorcycling competitor, Toby Price, remains in contention for the win.

Ahead of the eighth stage of the South American-based rally, Price solidified his standing in the bike field in second place.

Going into the event’s mandatory rest day, the 28-year-old was 3:12s from leader Paulo Goncalves.

Winning three of the opening seven stages, the KTM factory rider has had a splendid run in what is feared and revered as the world’s greatest offroad challenge and one of the most dangerous.

After claiming a brilliant third place in the 2015 edition of the Dakar, Price has benefitted from having the powerful KTM factory effort behind him for the current event.

While there remains more than 2000km of special stages ahead of him, the New South Welshman has more than justified his elevation to the factory squad.

This week’s poll asks, can Price take victory in the Dakar Rally?

Previous Story POLL: Which GT3 marque will you support at Bathurst?