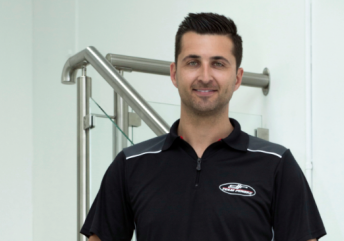 Fabian Coulthard feels he is settling in well at DJR Team Penske having spent time at the team’s workshop during the off season break.

The Kiwi’s move from Brad Jones Racing to the Queensland operation as part of the squad’s two car expansion was one of the high profile changes in the V8 Supercars silly season.

After four years driving a BJR Commodore, Coulthard is keen to quickly integrate himself with his new team.

While the bulk of the DJR Team Penske staff are fresh faces, the five-time V8 Supercar race winner will continue to work alongside engineer Phil Keed, who has also joined the team from BJR.

Eager to hit the ground running this year the New Zealander has already begun the process of acclimatising to the Falcon FG X before his maiden run in the car next month. The team is currently building new cars for both Coulthard and his team-mate Scott Pye.

“It is going to be important to gel with the team in this early part of the year before the season starts and get familiar with everybody,” Coulthard told Speedcafe.com.

“Simple things like learning everyone’s name is quite a challenge but we have a got a few days to get on top of that and hit the ground running.

“This lead up time is a good opportunity to go to the factory and sit in the car.

“We are in a position where I can put a seat in Scott’s car and get comfortable and adjust the cockpit ergonomics for me so it is somewhere close. We can then fine tune from there.”

Having witnessed the team’s upturn in performance towards the end of the 2015 campaign, Coulthard is excited by the squad’s potential this year.

“I was impressed with how the team progressed last year and I feel like they have done a fantastic job to get from where they were to where they are now,” added Coulthard.

“I think at this time last year they had a top eight car so I feel like there is plenty of promise.

“There is going to be a period of learning and hopefully that is not too long and we can hit the ground running in Adelaide.”

The opening round of the V8 Supercars season will take place on the Adelaide streets at the Clipsal 500 from March 3-6.