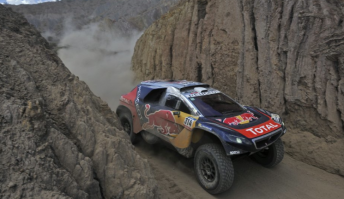 Sebastien Loeb has regained the lead of the Dakar Rally

Sebastien Loeb has moved back into the lead of the Dakar Rally despite suffering from an engine issue on Stage 7.

The nine-time WRC champion had led the first half of the Uyuni to Salta stage before an engine gremlin struck his Peugeot, which helped team-mate Carlos Sainz take the stage win by 38 seconds from the Frenchman.

Last’s year’s winner Nasser Al Attiyah was third while Stephane Peterhansel, who topped the overall standings heading into the stage, was fourth, a full 3 minutes and 27 seconds adrift of Sainz.

Peterhansel’s run through the 336km route has handed the overall lead back to Loeb, who enjoys a lead of 2 minutes and 22 seconds over the 11-time Dakar winner.

“The first (section) was awesome, we went at full tilt and opened up a big gap,” said Loeb.

“We then had trouble before the start of the second sector.

“The car worked more or less, it was a turbo management problem, but we lost our focus and bit and made a navigational mistake.

“Halfway through it started working properly again, and we put on the afterburners for the rest of the stage.

“I was super motivated this morning to take the lead back.

“We didn’t manage to do everything we wanted, but we’re in the lead and that’s what counts.”

The Australian entry of Peter Jerie and Dale Moscatt have gained another position with the pair lying in 33rd spot.

Violent thunderstorms saw the seventh stage shortened for the motorbike division with Antione Meo declared the winner of the abbreviated route.

The French rider topped the times by 1 minute and 53 seconds over Argentina’s Kevin Benavides. As conditions worsened officials decided to halt the stage altogether.

Rally leader Paulo Goncalves finished the stage in 15th after stopping on route to help Red Bull KTM rider Matthias Walkner, who was injured in a fall.

The Austrian rider was transported to hospital where he has been diagnosed with a broken leg.

As a result, Goncalves was given time back by officials for stopping to help Walkner which saw him rise to third on the stage.

Michael Metge finished the stage in fourth with Australia’s Toby Price in fifth with the KTM rider more than four minutes shy of Meo.

Price remins in second position overall but the gap to Honda’s Goncalves has grown to 3 minutes and 12 seconds.

“There were Australian flags at the finish of the special. It’s nice to get support when you’re racing so far from home.

“You must never drop your guard, it’s the best way to make mistakes.

“I’m happy with the work we’ve done so far. It’s far from over, a mechanical or a navigational mistake can destroy everything. My aim is to finish the race and get a podium spot.”

Competitors will enjoy a rest day today with the competition to resume on Monday.

Next Story Whincup shows off new Red Bull at Summernats

Previous Story ARMOR ALL Summer Grill: The growth of the Bathurst 12 Hour