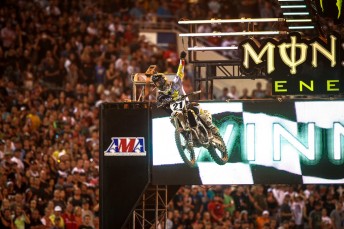 Jason Anderson on his way to victory in the 450 class

Monster Energy Supercross roared back to life this weekend with victories for Cooper Webb and Jason Anderson at Anaheim’s Angel Stadium in California.

Defending 250cc West region champion Webb sent a clear message to the rest of the 250 riders, as the Star Racing Yamaha rider decimated the field in a dominant performance to take victory.

Webb would eventually catch Nelson, and make a pass for the lead at the 10-lap mark. Nelson cruised to the chequered flag for a unchallenged second place finish.

An action packed 450 main event saw a rare red flag (stopped race) brought out three laps into the final, when Ryan Dungey got together with James Stewart causing Stewart to suffer a violent crash.

The race was completely restarted, this time without Stewart.

An eventful 20-laps would happen in arrears of Seely, with Trey Canard (HRC Honda) and defending champion Dungey (Red Bull KTM)colliding on lap four whilst battling for fourth and fifth position.

Although the commotion ahead of him, Rockstar Energy Husqvarna’s Jason Anderson diced his way from tenth place on the opening lap to the front runners, passing Seely for the lead on lap 13.

From there, Anderson led the following seven laps en route to his first ever Monster Energy Supercross Victory in the 450cc class.

Tomac finished a commendable fourth place after spending four months off of the motorcycle for shoulder surgery, with RCH/Soaring Eagle/Jimmy Johns Suzuki’s Ken Roczen salvaging a consistent fifth on a night that would prove challenging for the German.

Monster Energy Supercross heads to Petco Park in San Diego next weekend for round two of the series.

Previous Story Stoner: Marquez felt threatened by me at Honda