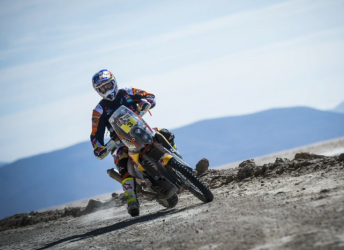 Toby Price on his way to victory in Stage 6

The Red Bull KTM rider powered through the 542km Stage 6 to take the win by one minute and five seconds from team-mate Matthias Walkner.

It wasn’t a completely uneventful ride as Price collided with a cow early in the stage but managed to recover sufficiently.

Honda’s Goncalves completed the stage in third seven seconds adrift of Walkner, although his overall lead was slashed by Price, who is now lying in second position.

“It wasn’t a bad day at all. I’m actually pretty happy. I led for the whole course today and made the tracks,” said Price.

“It’s the first time I’ve done that, which I’m pretty stoked about. It didn’t start off in the best way.

“Around 22 kilometres there were a couple of cows stuck in the sand. I went to go around one of them but it pulled in front of me and I hit it. So it wasn’t the best start to the race. We just regrouped and made sure to be back on top of the road-book.

“It’s been a good day, so I can’t complain. There were a couple of tricky bits of navigation, but I just took my time with them and made sure I was on the right track.

“We didn’t make any mistakes today so we’re really happy with that and I think it puts us in a good spot now.” 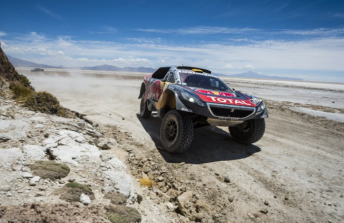 Meanwhile, in the car division 11-time winner Stephane Peterhansel has taken the overall lead after Sebastien Loeb lost more than eight minutes courtesy of two punctures and a sticking throttle on his Peugeot.

Peterhansel was locked in a battle with his other Peugeot team-mate Carlos Sainz for the stage win with the former coming out on top by 17 seconds.

Toyota driver Yazeed Alrajhi finished seven minutes adrift of the air in third while Loeb managed to battle his way to fourth.

Loeb had been running at a pace which would ensure he kept the overall lead until the second puncture struck towards the end of the route.

“I had a first puncture, then I had to do the almost 80 kilometres with the accelerator blocked at full power, so I had to control it with a switch and it was really complicated to drive like that,” said Loeb.

“Finally, I got another puncture and we had to change a second wheel. It was a complicated day. Hopefully, it will be better over the next days.”

As a result, Peterhansel now leads the rally by 27 seconds from Loeb with Sainz 5 minutes and 55 seconds adrift in third.

Last year’s winner Nasser Al Attiyah (Mini) remains the best of the rest in fourth but is 16 minutes away from the lead.

Prologue winner Bernhard Ten Brinke had a lucky escape on Stage 6 when his Toyota caught fire. Both Ten Brinke and co-driver Tom Colsoul emerged from the incident without injury.

The Australian entry of Peter Jerie and Dale Moscatt have moved up to 35th position overall.

Next Story ARMOR ALL Summer Grill: The growth of the Bathurst 12 Hour

Previous Story ARMOR ALL Summer Grill: How will DJR Team Penske fare in 2016?